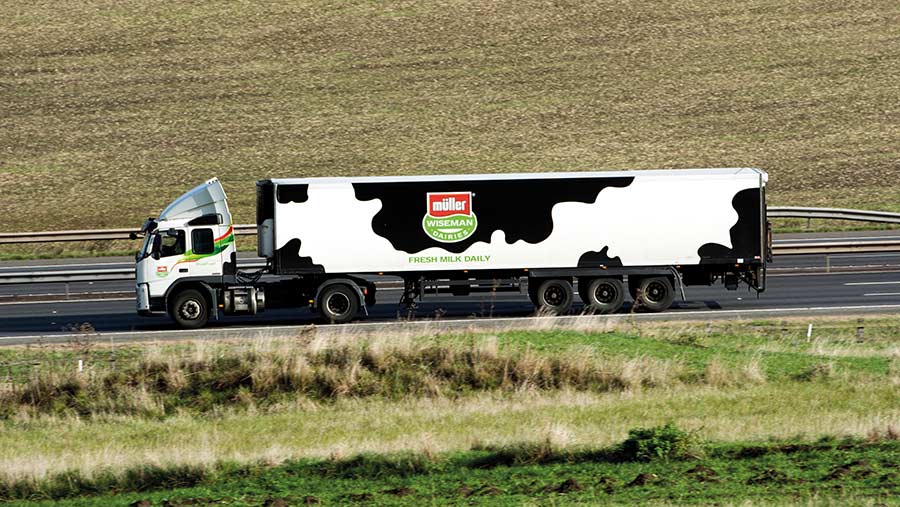 Dairy producers have been warned to check their insurance cover and the rules for disposing of milk after a spate of missed collections.

The most recent incident saw a number of farmers in the Midlands instructed by Muller to pour away milk on the weekend of 4 September.

Several businesses received a phone call from the processor at short notice, informing them the collection would not be taking place, forcing them to dispose of at least one day’s milk themselves.

In some instances, full tanks that had been ready for collection had to be poured away.

The affected farmers were told they will be paid for losses incurred, and milk collections have now resumed.

A spokesperson for Muller Milk & Ingredients said: “Thanks to the commitment and loyalty of our colleagues, our inbound milk and outbound distribution logistics teams continue to perform very well, despite the industry-wide driver shortage.

“The vast majority of our logistics operations are in-house, and this model is helping us maintain service levels, with 99.8% successful deliveries to customers in the past few weeks.

“Due to higher-than-anticipated sickness absence at one of our third-party hauliers, it was unable to pick up raw milk from a handful of farms over the weekend [of 4 September]. This was a localised issue and all farms who have been affected have been contacted.”

While this was more of a localised issue, it is not the only occasion this has happened recently. Dairy farms in Shropshire have also been forced to dispose of milk in recent weeks.

Ian Potter of Ian Potter Marketing Services said similar issues had taken place near Bridgnorth, where three farmers had been made to dispose of milk at the end of August.

Mr Potter said the farmers had collections every other day, and lost one collection day. A driver had reportedly been taken ill and no other drivers were free to replace them. The matter was resolved in time for the next pick-up, and a third party was called in to cover in the short term.

“The UK dairy industry, like all other businesses, is facing a serious shortage of vehicle drivers, mainly due to the fact that during the Covid-19 lockdown no new drivers came into the system due to no tests, plus the Brexit effect, which has cut the supply of mainland eastern European drivers,” Mr Potter said.

“The Covid and Brexit effect is estimated to have clocked up 100,000 missing lorry drivers, with 30,000 HGV class 1 drivers lost due to the fact the examiners were all on furlough.”

As an industry, the whole dairy sector is facing supply chain issues, and driver shortages are likely to affect a range of dairy processors.

Phoebe Russell, NFU dairy adviser, said: “We are aware of the issues, which we understand are affecting a number of members across various regions. It appears that driver shortages at haulier level are proving challenging for some smaller and some of the larger processors in providing normal and uninterrupted collections of milk, causing supply chain frustrations at all levels.

“Members report that they are largely being kept updated by their processor contacts and the situation is ongoing. For some, hauliers are alternating rounds for collections, which had led to some milk being disposed of at a farm level, due to storage and collection limitations on farm and by the processor.

“To our knowledge, timely payments are still being made for uncollected milk, however we are always [aware] of the potential for such interruptions to supply chains to escalate, causing downward pressure onto farmers.”

The NFU Dairy team are advising members to remain in close contact with their processors and provide updates through their regional NFU contacts to the national dairy team so they can monitor the situation and support members.

An NFU Dairy spokesperson said: “We advise members to check the rules on how to manage the issue [of milk disposal] with their relevant local authority.

“For example, we understand that the Environment Agency have some guidance for England on the Gov.uk website. Equivalent national bodies may differ, but we recommend farmers make themselves aware of regulations around nitrate vulnerable zones and rules on storing silage, slurry and agricultural fuel oil to ensure they are not at risk of breaching any legal requirements. They should contact their relevant authority before spreading any milk on land.”

NFU members can find professional and legal advice from the union’s CallFirst service.

An NFU Mutual spokesperson said: “We understand this is an extremely challenging time for dairy farmers, and we continue to provide support to the main farming unions.

“For dairy farmers who have insured their milk with us, our uncollected milk extension provides cover for wasted milk if the dairy they are contracted to is unable to collect due to driver shortages. Or if alternative collection of milk can be arranged, it covers reasonable costs incurred to reduce the potential wastage of milk.”

If you are a producer who has been affected by milk collections in recent weeks, email charlie.reeve@markallengroup.com