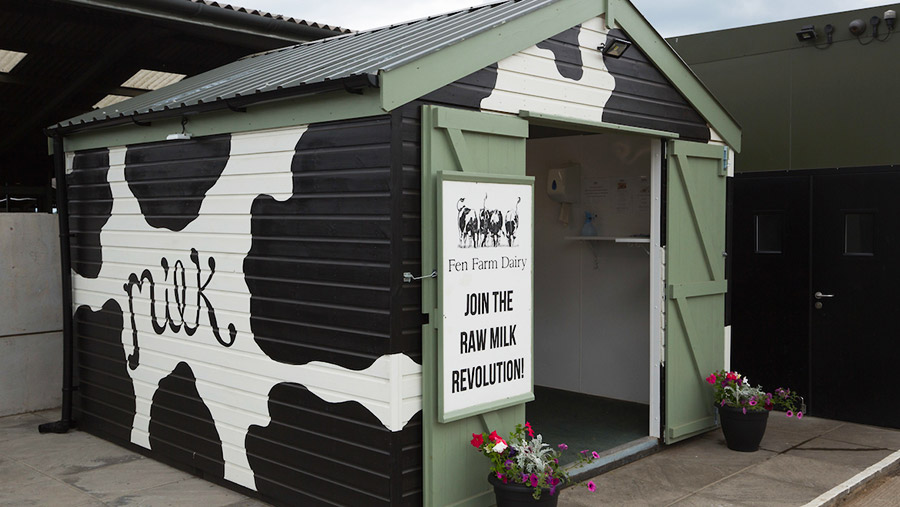 Dairy farmers who have diversified into selling raw milk from the farmgate say it pays much better than prices for fresh milk sold to UK dairy processors.

More than 170 producers currently sell raw milk direct to consumers either at the farm, often dispensed through vending machines, at a farmers’ market or through a delivery service.

The returns can be highly lucrative compared to selling unpasteurised milk to a processor, offering loss-making dairy businesses a lifeline. Raw milk sold directly to consumers fetches about 100p/litre, compared to a current average of 27-28p/litre sold to processors.

See also: Where to buy milk direct from farm

But because raw milk skips the pasteurisation process, if it is not produced safely it may contain bacteria that is harmful to health such as salmonella, E coli, listeria, campylobacter and others.

Raw milk sales in the UK have increased five times over in the past five years – from 610,000 litres in 2014 to 3m litres last year – as consumer trends for eating unprocessed foods have grown in popularity.

But while licensed farmgate sales of raw milk are perfectly legal (it is illegal to be sold in the high street via shops or supermarkets) there is very little in the way of official guidance or support for producers in terms of production standards, hygiene or microbiological testing.

Therefore, the government’s food safety watchdog, the Food Standards Agency (FSA), has launched a consultation on raw milk, which runs until May.

The FSA aims to implement tighter controls around the production and the sale of raw milk, notably in the areas of food safety testing protocols and documentation of on-farm and bottling procedures (See “FSA consultation on enhanced controls for raw milk”).

The guidance is due to be published later this year following the findings of the consultation.

Launching on 4 March, it will be the first raw milk producer group formed anywhere in the world to work together with the government to bring better support and regulation to producers.

The RMPA is the brainchild of Suffolk dairy farmer and raw milk producer Jonny Crickmore, with the help of Bronwen Percival, one of the UK’s leading cheese experts.

Both then got in touch with Shropshire beef and dairy farmer Christine Page, who was appointed as group secretary and she has worked tirelessly to get the association started.

Mr Crickmore tells Farmers Weekly the association was set up in response to fears that the FSA was considering a ban on raw milk production following a couple of food poisoning outbreaks linked to drinking it.

“Several farms around the UK had been shut down because they had been making people ill from selling raw milk.

“I went to the FSA and told them it was a bit of a shambles as the rules for producers were not clear enough.”

With help from Mr Crickmore, the NFU hosted a raw milk producer conference at Stoneleigh in May, which started the journey of forming the RMPA.

Raw milk producers have since held a number of meetings with FSA officials. “The great thing is we are working alongside the FSA. There have been really constructive and positive talks,” says Mr Crickmore.

“We, as producers, want to produce safe milk. “But we don’t want everything thrown at us which makes it impossible for us to do so.”

Mr Crickmore, 2017 Farmers Weekly Diversification Farmer of the Year, who produces the award-winning Baron Bigod soft raw milk cheese from Fen Farm Dairy, in Bungay, says the RMPA’s ultimate aim is to ensure all its members are producing raw milk according to the right food safety requirements.

“It’s a high-risk food and we are going in a direction where farmers who produce and sell raw milk will be in a much safer place for consumers to buy it,” he explains.

“The milk that is going to be sold will be from producers who are more educated and aware of what they are doing around the safety of raw milk production.

“The risks are mainly pathogens in the milk. It’s a very small risk. In the past two to three years, there have been two to three food illness outbreaks associated with drinking raw milk.

“It’s often because the farmer is not aware that he/she has got a pathogenic strain in their milk and it’s making people ill.”

The RMPA also aims to:

The training days will help bring producers up to date with the government’s upcoming changes to raw milk legislation and will include training in raw milk production best practice and provide networking opportunities.

Any raw milk producer in the UK can join the RMPA.

Raw milk suppliers are going to have to introduce stricter food safety controls, including the routine testing of their milk, following an increase in the incidence of associated human illness.

The recommendations are contained in a new Food Standards Agency (FSA) consultation, which says producers will have to have a formal “food safety management system” in place “to eliminate or reduce risks to an acceptable level”.

The consultation notes that there were five outbreaks of human illness linked to raw milk in 2015-17, affecting more than 100 people, compared with just one case in 2014, and no cases for the 12 years before that.

The FSA attributes this to the five-fold increase in raw milk sales in the UK since 2012 to 3.2m litres, supplied by almost 170 producers.

This increase was driven in part by a growing consumer belief that raw milk has health benefits over pasteurised milk, and in part by an upturn in the number of on-farm vending machines making the product more available.

“The evidence base indicates that improved controls are needed to provide better risk management of raw drinking milk,” says the FSA.

A suitable food safety management system should include hygiene and temperature checks, the identification and control of potential hazards, and other maintenance controls, such as cleaning protocols and veterinary records.

To verify that the system is working, the FSA is planning to introduce monthly pathogen sampling of milk – something only one-third of producers say they already do.

The consultation closes on 30 April, though the accompanying letter states that the FSA board has “already agreed to support these recommendations”, as contained in a report it considered last June.