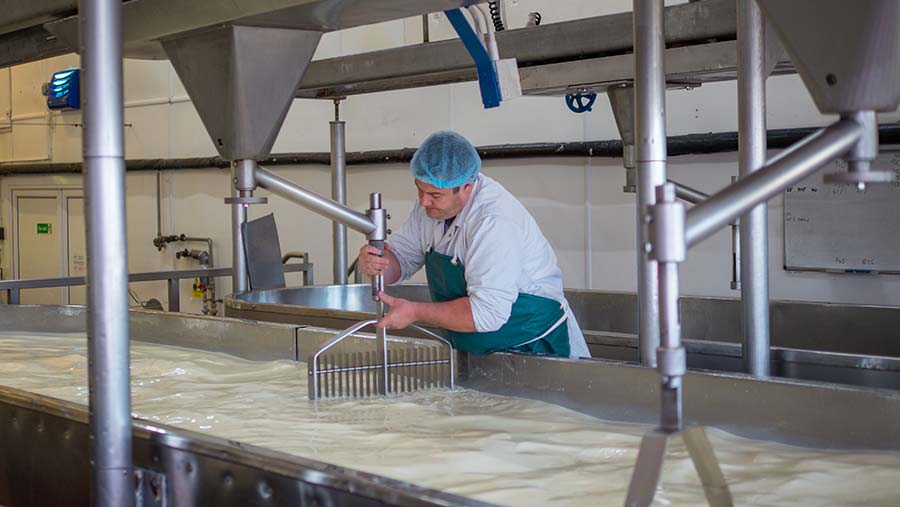 As a result, the Actual Milk Price Equivalent (Ampe), the market indicator for milk used in butter and SMP, rose to a record 54.48p/litre in March, up by 12% (5.62p/litre) on the previous month.

The Milk for Cheese Value Equivalent (MCVE), which gives an estimate for the value of milk used in mild cheddar and whey, stood at 49.95p/litre during March.

The Ampe and MCVE market indicators currently used by AHDB reflect costs for the third quarter of 2021 and do not yet consider the recent increases in processing costs facing the industry.

Butter prices were up 11% on the previous month and 59% on the same month last year, according to the AHDB.

SMP and mild cheddar prices were up 10% and 8%, respectively, in March compared with February levels.

Katherine Jack, senior dairy analyst at AHDB, said: “Not only are milk deliveries running 4% below last year’s levels, but farmers are facing an extraordinary amount of pressure on cash flows.

“As we enter the peak production period, seasonality adjustments will reduce milk prices on many contracts. This will add even more pressure to bank balances and further discourage milk production over the spring months.”

The union says further spending is needed in the supply chain to avoid putting milk supply at risk.

UFU dairy chair Mervyn Gordon says both retailers and processors need to be supporting farmers so they can receive a fair return that helps cover the extra expenses they are enduring.

“When dairy products are doing well in the market with prices rising, you would normally see an increase in the amount of milk being produced off the back of it, as farmers want to take advantage of improved returns. However, the eyewatering production costs are having the opposite effect,” Mr Gordon says.

“On average, 60% of direct costs on a dairy farm are attributed to feed, fuel and fertiliser. What’s even more worrying is that the full impact of cost increases is still to be felt by the dairy sector.”

The Ampe indicator reaching a historic high in March has pushed up the price paid for excess litres for some milk processors.

Barbers Cheesemakers is paying 52.48p/litre as a spot rate for excess litres above a producer’s base milk volume.

The processor has also announced a price rise of 2p/litre for May, for standard litres.

This will take the price to 38.5p/litre for a Barber’s assured standard litre with 4.1% butterfat and 3.28% protein.

Based on the milkprices.com manufacturing league table, the May price will climb to 39.62p/litre, on 4.2% butterfat and 3.4% protein.

Barbers said it was unprecedented for price rises to be taking place in May, which is the UK’s peak month for milk production.

“We continue to be in constant dialogue with our broad range of domestic and global customers to detail the unprecedented cost position on farm and in our supply chain, and the requirement to reflect higher returns across our cheese, whey protein and butter portfolio,” it said.

Milk producers supplying Saputo Dairy will receive an extra 0.7p/litre from 1 May, making it the sixth consecutive monthly increase by the processor.

This will bring the manufacturing standard litre of 4.2% butterfat and 3.4% protein up to 38.75p/litre.

Welsh co-op South Caernarfon Creameries is set to increase its manufacturing standard litre to 40p/litre in May, an increase of 3p/litre.

According to milkprices.com, it will become the first cheesemaker to reach the 40p/litre threshold for a standard manufacturing litre of 4.2% butterfat and 3.4% protein.

Milk prices at the co-op are now 10.87p/litre higher than in the same month last year.