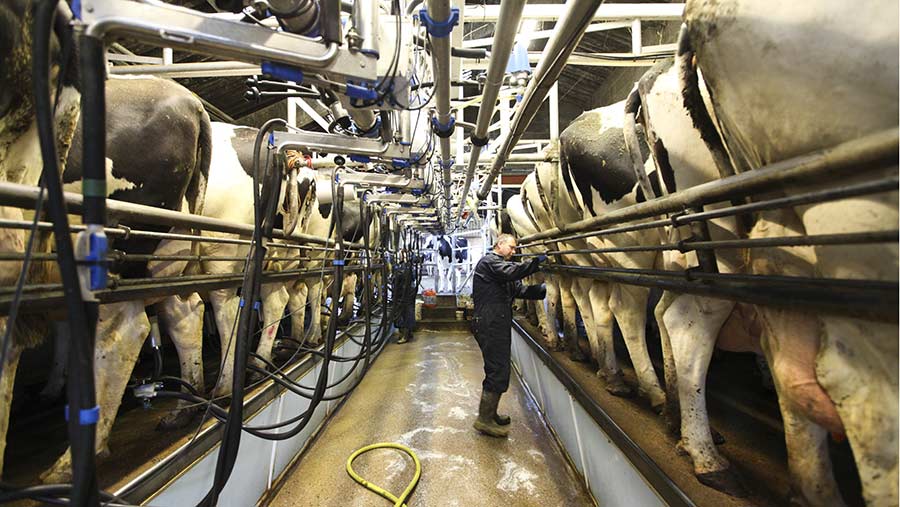 Rising feed costs and concentrate usage as a result of the third driest summer on record will have a severe impact on milk production volumes come October, says AHDB Dairy.

Latest AHDB milk production forecasts predict just a 0.7% drop across in deliveries from October to March 2018-19, to 6,080m litres.

But the June predictions are expected to be revised downwards when the next forecast comes out in September, after the full repercussions of the drought become clear.

However, with low maize yields and a lack of grass silage dairy farmers are also having to buy in fodder, as well as contend with the additional costs of mechanised feeding, slurry management and increased labour – all on the back of an extremely challenging spring.

Heat stress is also likely to have a negative impact on yields and fertility.

To maintain the yields predicted in the June forecast, farmgate milk prices would have to increase in line with feed costs.

The challenge now is in predicting where production will be most affected, according to AHDB lead dairy analyst Chris Gooderham.

“We could see a situation where cheese buyers stop processing their milk because they’re selling it for a good price,” he says.

“Taking a 3% fall in total production just out of cheese would equate to a 12% drop just from these producers.”

He adds that with UK cheese stocks already low, reduced production would push consumer prices up and could potentially lead to a cheese shortage in the spring.

“At the moment it’s all ifs, buts and maybes with a lot of variables which will decide how production is affected,” he adds.

What if the weather improves?

Even favourable weather conditions would not be enough to prevent a production fall, Mr Gooderham says.

“My gut feeling is that even if producers manage to get a second cut after the recent wet weather it will not be enough to catch up.

“An Indian summer will help but it won’t be enough,”

The number of cull cows sent to for slaughter increased by 19% to 9,000 head in July compared with the previous year.

The levy board says the majority of dairy animals in these figures will have been low yielders and dry cows, but any reduction to the overall milking herd would further reduce national milk production.

If all 9,000 animals were dairy cows, the impact on UK production across the six-month period would equate to a drop of 30m litres.

Weather conditions have been affecting most of the major dairy-producing nations across the continent.

Irish production was significantly down on expectations and French and German production crept up just 0.9% and 2.1% – but farmers there face the same problems as in the UK with winter approaching.