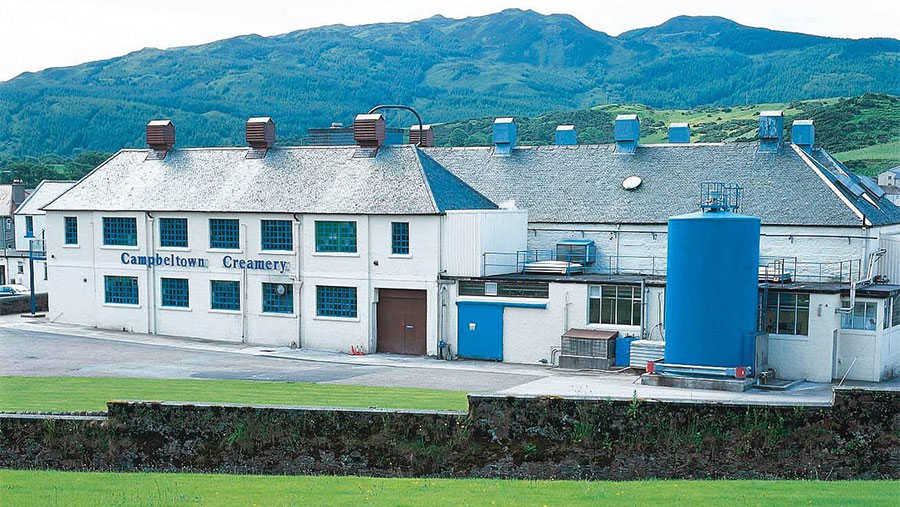 First Milk is to close its Campbeltown Creamery on the Mull of Kintyre, after a farmer bid to buy the operation failed to raise enough cash.

The creamery was put up for sale in April 2018 when First Milk announced that the site was not core to its business strategy.

Some 29 farmers supply the plant, which has been making cheese using milk from the area since 1923 and making Mull of Kintyre brand cheddar since the 1970s.

When it became clear that a sale to a third party was unlikely, the local Kintyre farmers launched a plan to take over the creamery.

However, they were not able to raise the cash in time, hence the closure announcement. Their milk will continue to be collected by First Milk under their existing contract terms.

“It was the right thing to investigate all avenues to see if we could keep the creamery open in Kintyre,” said James Barbour, chairman of the Kintyre farmers’ steering group.

“There was widespread enthusiasm from the local farmers to try to secure the future of the site and genuine support from First Milk, the Scottish Government and the local community, along with a successful crowd-funding campaign.

“Despite all of this we were not able to find a financially viable long-term solution for the creamery. I would like to thank everyone who has supported us through this period.”

John Smith, NFUS dairy chairman and local Kintyre dairy farmer, said: “My heart goes out to all the staff that work at the creamery and it is regrettable that the Mull of Kintyre brand that we have passionately supported will now no longer be available.

“That is due to the harsh, economic reality of processing milk in an incredibly tough dairy industry that has witnessed so many casualties at both farm and processing level in recent times.

“While this is very disappointing news, it is reassuring that all of the local farmers are members of First Milk and will continue to benefit from being part of a national co-operative with an evergreen contract, and continue to have their milk collected in the future.”

First Milk chief executive Shelagh Hancock said the co-op was disappointed that it had not been possible to conclude a sale of Campbeltown Creamery.

“We fully appreciate that this decision has significant consequences for colleagues at the creamery and in the local community, but it is important that we act in the best interest of the wider business and our farmer members and continue with the solid progress we have made in strengthening and developing First Milk,” she said.

“We regret the impact this decision will have on our colleagues and are committed to treating those affected fairly and with consideration during this difficult time.

“Throughout the past 18 months we have been in regular dialogue with our local members on Kintyre about the future of the site.

“Nothing will change in respect to their co-operative membership of First Milk, and we will continue to collect and pay for their milk on the same basis as before.”