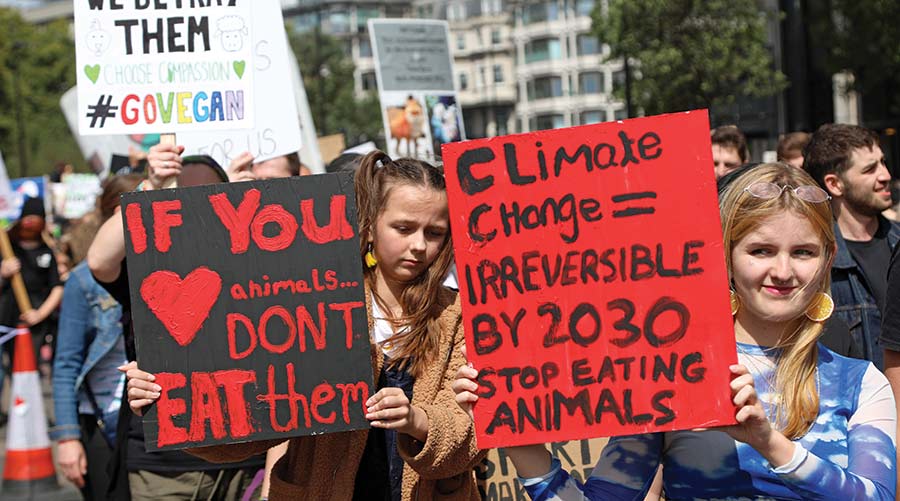 Just how prevalent is veganism, how persuasive are the arguments and what should the dairy sector be doing about it?

Vegans may make a lot of noise, but their overall impact on the dairy market is still somewhat limited, while many of the arguments used against the sector do not stand up to close scrutiny.

Those are among the findings of new report from Kite Consulting, Dairy 3.0 – a new paradigm for the UK dairy industry, published this week (Friday, 13 September).

Despite this, the report also argues that the sector needs to tread carefully and engage positively with consumers if it is to regain the moral high ground and guard against a fall in consumption.

According to the report, the number of UK citizens who can be classed as vegans is open to conjecture, but is still relatively small.

One survey conducted by comparethemarket.com and published in The Independent last year, suggests as many as 3.5m people, or 7% of the population, are now vegan.

But the report authors dismiss this as a “gross overestimation” due to the nature of the question (“Do you ‘identify’ as a vegan?”).

They attach more credence to a 2019 Kantar study, which shows that 2.6% “identify” as vegan, falling to less than 1% once a weekly “food diary” was checked.

“Veganism encapsulates an ideal that is growing in popularity, but one that is realised more often by a flexitarian approach than by a strict vegan one,” says the report.

So why is it growing?

Kite Consulting points to the emergence of social media as a major driver, which has allowed rapid exposure to the ideas around veganism, especially to a young and more impressionable audience.

“Instagram allows pictures and videos to be shared, which provide powerful visual stimuli in a way that articles and debates simply cannot.”

Additionally, social media allows for the sharing of ideas, petitions and campaigns such as Veganuary, which have taken veganism from the fringe to the mainstream.

Perhaps more significantly, the use of “cookies” and algorithms mean that, once people have started accessing vegan material online, they will be fed more and more of it.

“When the whole motivation of websites is traffic and engagement, there is a low chance you will be shown something that challenges your beliefs,” the report suggests.

What are the arguments and counter arguments?

Environment
One of the most common claims made by those who oppose the consumption of meat, eggs and dairy produce is that livestock production damages the environment – especially in terms of climate change.

The 2014 documentary Cowspiracy claimed that “methane has a global warming potential 86 times that of carbon dioxide on a 20-year timeframe” and suggested livestock and their by-products “account for 51% of all worldwide greenhouse gas emissions”.

But the Kite report explains that, while methane is indeed more potent than carbon dioxide in the short term, the fact it dissipates over a period of nine to 14 years (unlike carbon dioxide which can last for millennia), means its contribution to global warming is quite limited.

“Steady-state herds actually add very little to global warming as every methane molecule added to the atmosphere is balanced out by the expiry of methane molecules produced by the same herd several years ago,” it says.

Health
Health is a big motivator for people looking to try a vegan diet, as it is often promoted with images of wholesome food and hashtags such as “wellness” and “clean eating”.

Red meat has also been vilified by a 2015 World Health Organization (WHO) report, which classified it as “probably carcinogenic”.

But the Kite report notes that the WHO makes no suggestion of any cancer risk associated with white meat, fish, dairy or eggs.

In terms of nutrition, it also explains that, while vegans may have 10-35% lower cholesterol levels, this includes “good cholesterol” as well as “bad cholesterol”.

“Vegans can generally get enough protein through soy products, lentils, chickpeas and nuts, but there are common vitamin deficiencies among vegans for B12, B6 and D.

This can cause a range of symptoms including anaemia, fatigue, depression and mouth ulcers.”

Ethics
The environmental and health arguments against livestock farming are easy enough to counter, but ethics involves many more value judgements about the rights of humans to exploit other animals.

The Vegan Society claims that “all living creatures fear death, just as we do”, while the Farm Animal Welfare Council advocates the “five freedoms” for farmed livestock – freedom from hunger/thirst, discomfort, pain, distress and the freedom to express normal behaviour.

Key findings of the report:

The report suggests that farmed animals actually enjoy a better chance of meeting these freedoms than wild animals, which may suffer from hunger, thirst, fear and predation.

It also notes that, were it not for farming, the majority of food-producing animals would not exist at all.

How can dairy farming resist the challenge?

Whatever the numbers and arguments used, there is little doubt that veganism is on the increase and the dairy sector needs to rise to the challenge.

But, despite the strong farmer take-up of social media campaigns like Februdairy to counter Veganuary, the report authors express concern that it amounts to fighting fire with fire, and so entrenches the conflict.

“All too often it descends into a social media tit-for-tat, of which there can only be one victor. It leads to an incoherence in messaging, which plays into the vegans’ hands.”

Instead, the report calls for a change in mindset. “Rather than continuing to justify current practices in a defensive way, we must show that we care about the things that consumers care about, and then explain why our practices deliver that.”

The report calls for a three-pronged approach, based on generic promotion of the health benefits of dairy; faster innovation; and convincing brand marketing.

And it suggests a change in the way dairy engages with government – away from an approach based on entitlement, towards a more collaborative and problem-solving mentality.

It increasingly feels that, if you are involved in the livestock industry, you are somehow held responsible for everything that is wrong in the world.

In the past few months the significant anti-farming noise from the vegan movement has felt like a thorn in our collective side. For certain, vegan propaganda is effective and people are taking notice.

Our analysis shows that the vegan movement is using the environmental debate to promote their cause as a “Trojan horse”. They see it as an opportunity to progress from being a movement to getting policy change from government.

This is a serious threat – far more serious than responding to chatter on social media.

If we can’t prove that we are markedly reducing carbon equivalent emissions, then a decline in meat and dairy consumption will be seen as the only alternative.

Combine government’s need to drive emissions down with growing societal pressure on this matter, and there is the very real risk of restrictive legislation coming into force.

So, how should we respond?

First, we need to protect the industry by becoming much more proactive in the way we engage government about the positive work being done to address climate change, improve environmental protection and enhance animal welfare.

As an industry – from farm to fork – we need to ensure that positive lobbying is properly implemented and resourced so that a more balanced and fair view is embedded in the psyche of policymakers, rather than the one-sided anti-animal agriculture one that seems to come from so many pressure groups.

Second, we need to dramatically improve the way our industry and our products are promoted to the public.

With slim margins this is never easy. But unless meat and dairy are promoted much more visibly, in an engaging and mainstream way that combats misinformation and demonstrates the positive benefits of a balanced omnivorous diet, then the industry cannot complain if our markets are taken by innovative alternatives that are being heavily promoted and marketed.

Finally, we need to be even more consumer-focused, leading change rather than responding, bringing fresh thinking and an open and engaging approach to all that we do – from our welfare and production standards to the impact we have on the environment.

We must get on the front foot, positively challenging perceptions and misinformation and driving change where necessary, rather than simply defending and justifying current practices.