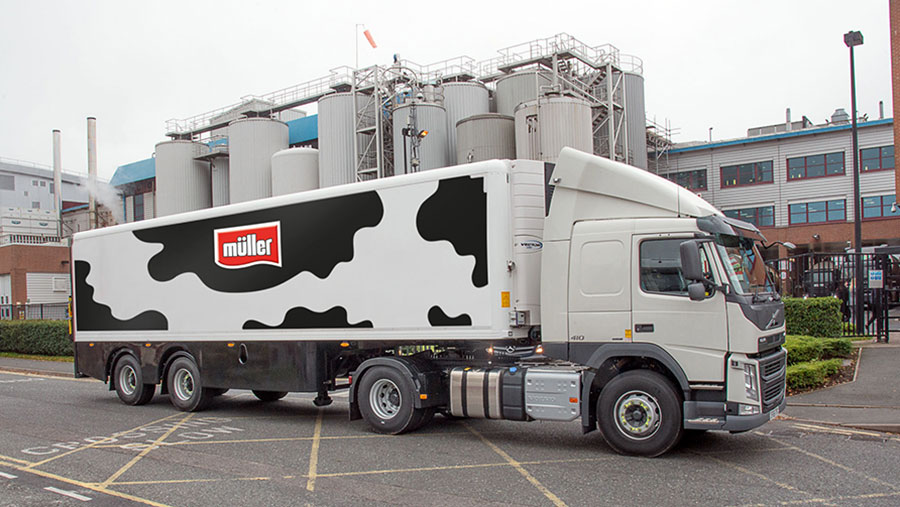 Farm leaders in Scotland are seeking urgent talks with Muller management, after the dairy processor announced a month-long review in Scotland to tackle what it describes as “a growing milk surplus”.

The company has warned its 230 dairy suppliers in Scotland that the spike in production seen over the past five years is not supported by growth in demand for milk in Scotland.

As a consequence, it is currently redirecting millions of litres of milk to England, which it says is unsustainable financially and has significant environmental consequences.

Rob Hutchison, milk supply and operations director at Muller Milk & Ingredients, said production from Scottish farms that supply Muller had risen by by 25% since 2014, but consumption was marginally down year-on-year.

“As a result, Muller is transporting 180m litres/year – equivalent to 33 litres of additional milk for every person in Scotland – to our dairies in England, where we can find a market for it.”

Mr Hutchinson said the company “must work urgently with farmers who supply us and other industry stakeholders to review a range of measures to address this increasingly unsustainable situation, both in the short and longer term.”

John Smith, milk committee chairman for NFU Scotland, said the announcement was a real concern for producers and staff were already taking calls from worried members.

“They can be reassured that, as a matter of urgency, NFUS will seek a discussion with Muller management at the earliest opportunity, at which we will present their views and seek a better understanding of the short- and long-term strategy for the Muller supply chain in Scotland.”

The announcement comes just weeks after Muller announced the planned closure of its distribution depot in Aberdeen, suggesting the operation was no longer viable against a backdrop of declining fresh milk sales.

In July, it also confirmed that the Foston dairy in Derbyshire would close by the end of the year, although most producers supplying the plant are being switched to other Muller sites.

Both of these moves are part of a 12-month, £100m cost-cutting exercise called Project Darwin, designed to address profitability issues.

The notice period for producers on Muller’s standard contract is 12 months, but the company is stressing that its review will examine a range of potential measures and that terminating contracts may not be the whole answer to the challenge.