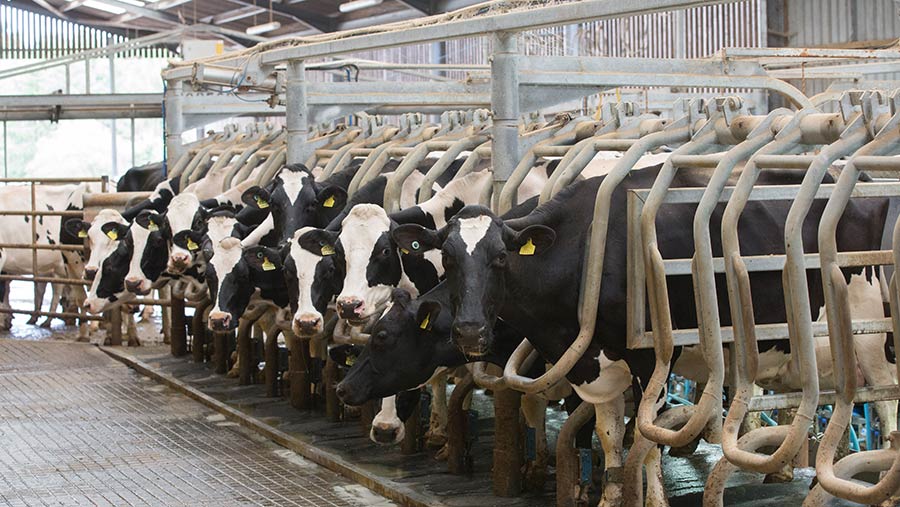 Suppliers on Muller contracts that are part of Sainsbury’s Dairy Development Group (SDDG) will receive an August price of 47p/litre, up by 1p/litre on levels a month earlier.

This is based on a standard litre of 4% butterfat and 3.3% protein.

SDDG suppliers on Arla Foods contracts will also increase by 1p/litre to 46.88p/litre from 1 August.

See also: Why big cows are inefficient and how to breed smaller stock

Dairy farmers supplying Tesco on Muller contracts will receive 46p/litre for August, as prices stand for another month.

Tesco’s Sustainable Dairy Group (TSDG) prices are based on a standard liquid litre of 4% butterfat and 3.3% protein.

The retailer previously increased its milk price in July by 4.41p/litre to 46p/litre for its sustainable dairy group. This price increase was intended to help offset exceptionally high levels of on-farm inflation.

TSDG contracts are based on cost-of-production modelling and are currently being reviewed on a monthly basis in order to keep up with rising on-farm costs.

The August price for Arla Direct TDSG suppliers will also be 46p/litre.

Dairy farmers supplying Co-op through the Muller milk group will receive an August price of 46.33p/litre.

The August price has increased by 0.33p/litre from 46p/litre in July, for a 4% butterfat and 3.3% protein standard liquid litre.

Ian Browne of the Farm Consultancy Group said liquid prices were not looking very exciting when the sheer cost of feed was considered.

“It’s costing high-yield producers – who tend to be on contracts with Tesco and Sainsbury’s – an awful lot of money to make the milk and 46p/litre isn’t going to tempt them to produce a lot more,” said Mr Browne.

High fertiliser prices and recent dry weather has meant production is down, with silage quality dropping and a lot of producers feeding who wouldn’t normally need to this time of year, said Mr Browne.

“We need that milk price because the costs have gone up by so much,” he said.

Forage is likely to be in shorter supply later in the year, with decent quality silage harder to get hold of, predicted Mr Browne.

Some industry estimates reckon costs of production to be in excess of 50p/litre.

Feed costs have started to decline slightly in recent weeks, while other input costs such as labour and fuel remain high.

Global dairy markets dropped back last week at the most recent global dairy trade auction, with the price index falling by 5% to average $4,166/t (£3,468/t).

Spot milk prices have reportedly eased back slightly to between 51p/litre and 53p/litre, according to milkprices.com.