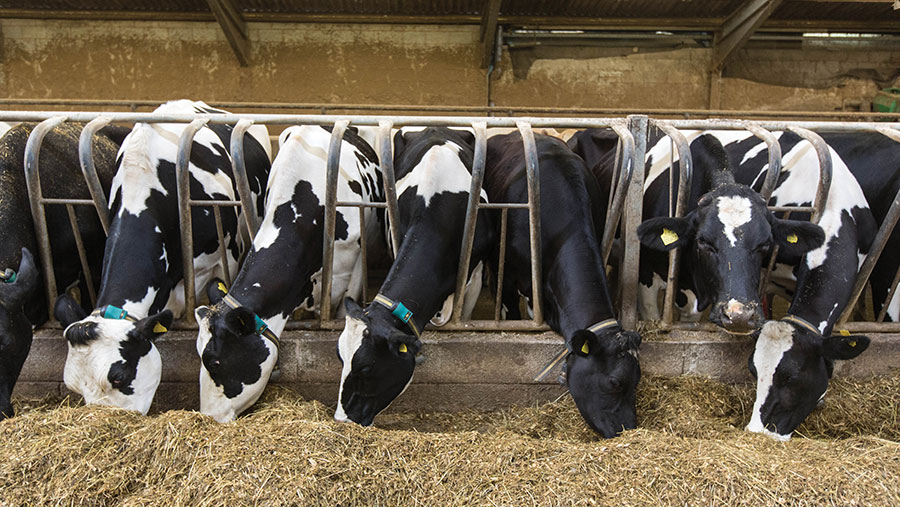 High feed costs are pushing the milk-to-feed price ratio to a level where some producers will cut output to save costs.

Increased feed prices will add 1.5-2p/litre to production costs for the current milk year, said Kite consultant John Allen, taking feed costs to between 11.2p and 11.5p/litre, compared with less than 10p/litre last year. This pushes the total cost of production well above 30p/litre on average.

On top of the feed cost concerns, finding and keeping good staff is a preoccupation on many dairy farms, he said.

Recent milk price increases from a few of the larger processors have taken some producers out of the red in terms of milk production costs.

However, farmers supplying fresh liquid and ingredients markets have been operating with a low ratio of milk to feed price for at least the past year.

The ratio is a measure of how much feed can be bought with one litre of milk. Recent milk price increases have been countered by a marked rise in feed cost, putting the February ratio at 1.21, based on an average of concentrate costs reported by Promar and Kingshay.

An estimate is also produced based on a formula using straights prices averaged over a rolling timeframe –- this figure was 1.15 for February, dropping to 1.14 in March and April.

“However, these are both averages using the Defra average farmgate milk price, so they hide the variation in what farmers are facing,” said Ms Clayton.

Last week, the AHDB announced that a drop in milk delivery figures suggested the spring peak in production levels was already over for 2021, easing fears of oversupply and pressure on prices. The peak volume was 0.4% below forecast levels at 37.93m litres.

The outlook for milk remains firm on strong demand. Most of the key dairy commodities have risen sharply in value through the first few months of 2021, although the index at the three most recent Global Dairy Trade online auctions has fallen slightly.

Strong demand from China is one of the main reasons for the forecast, alongside an improving global economy and strong demand for dairy in a relatively tight market.

Feed consistency For TMR-fed cattle, ensure consistency of the feed in the morning and afternoon. Sorting behaviour can be monitored using a Penn State particle separator, and feeding frequency, mix times and chop length can be optimised.

Review lying time Cows should be lying down for 13-14 hours/day to ruminate efficiently. Cows standing in their beds imply an issue with comfort or space.

Lame cows Minimise the time lame cows are on their feet by keeping them close to buildings or in a hospital pen, and bring them in at the end of milking to reduce waiting times.

Milk from forage As the lowest-cost feed source, maximise the volume of milk solids from forage.