The Dutch dairy industry is facing an unparalleled crisis that could result in the culling of half a million cows. We look at how the situation arose, the ambitious plans in place to avert catastrophe and ask what the fallout could be for UK farming.

With a rapidly growing dairy herd, the volume of the waste has become a serious problem and the Netherlands risks losing its EU nitrates derogation as a result.

This requires a firm solution – farmers will have to get rid of a lot of cows.

Some have mooted a massive cow cull of up to 160,000 animals as a rescue plan for the sector.

This would result in the average Dutch dairy farmer (87 milking cows) having to get rid of an estimated 10 cows within six months.

On top of that, a new EU phosphates quota system will be introduced in 2018, which will also have to lead to smaller herds.

This is necessary to avoid even bigger cuts, which could mean the culling of half a million cows. If these plans fail, Dutch dairy farmers will be exposed to undiluted European rules.

Rising milk prices as a result of a smaller herd should at least soften some of the pain. 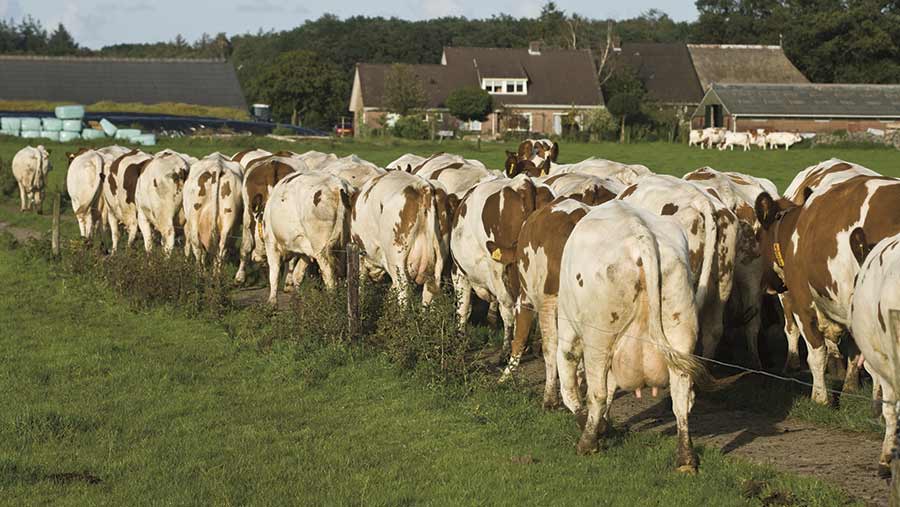 The Dutch government made a deal with the EU which permits farmers to use 230-250kg of pure nitrate a hectare compared to the EU standard of 170kg/ha.

This “nitrates derogation” agreement brings huge economic advantages, namely providing room for an extra half a million cows, amounting to about €1bn in extra revenue a year.

But the agreement is now at risk because EU limits for phosphate production have been breached for two years running.

The situation has been caused by the rapid growth of the national dairy herd, growing 5% in size since spring 2015 to four million cows and heifers.

If phosphate can be lowered by means other than culling, the cows can stay.

The constant uncertainty is weighing on farmers and is preventing any forward planning. They realise there has to be limits to their growth, but haven’t stopped developing their businesses on an individual basis.

No one, it seems, has the capability to control growth in the industry.

The failures of control lie with the Dutch government. The end of milk quotas came as no surprise, but there was not any new legislation to control growth after April 2015.

In fact, growth had started far before that. The last year of quotas brought a record high super-levy from Brussels. Farmers saw paying this penalty as an investment to gain a strategic position.

More than 30 years of Dutch manure policy have shown that those who anticipate regulation end up on top.

In July 2015 the government proposed a new phosphate quota to tackle nitrates breaches, but it was never passed. Brussels vetoed the phosphate proposals that autumn, causing yet another year of uncertainty. Meanwhile, Dutch farms continued expanding.

The Brussels veto caused a great deal of panic. The derogations for the four years 2018-21 are now at real risk of being withdrawn by the EU, which would cripple Dutch dairy farms.

To avoid a deepening crisis, a committee of farmer’s unions, feed producers, industry representatives and the country’s leading agricultural bank formulated a new plan, in co-operation with the government’s agricultural department.

The three-pillar plan to save Dutch dairy 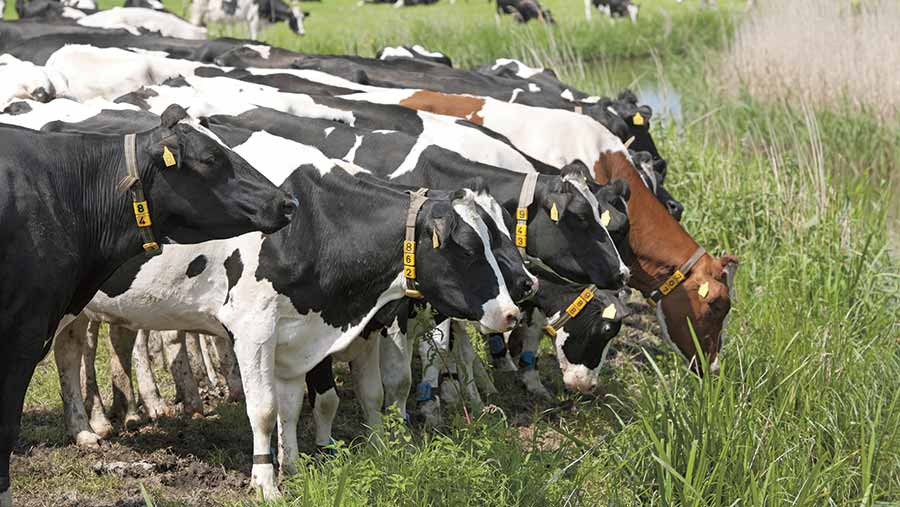 Producers who want to wind up their businesses now will be compensated by an estimated €2,200 for each cow they give up.

This is because farmers holding out to see what derogations the EU give the Netherlands for 2018 has caused a temporary stagnation of producers exiting the industry.

The banks will absorb the majority of risk from these payments, and with it form a crucial element of this ambitious plan.

The rest of the funding will be split between the government and farmers. The dairy sector organisation ZuivelNL has already announced an extra levy of 18c/100kg (0.16p/litre) of milk.

Pillar two is a penalty for producing more milk than on 2 July 2015, when the new legislation was first proposed.

This is where the role of the nation’s dairy processors, the biggest of which is FrieslandCampina, becomes vital.

However, at the start of December three firms decided to withdraw support for the plan.

The significance of this decision is not yet clear. Another contentious point will be the exact amount of milk farmers will be allowed to produce.

Pillar three is an ambitious solution found in the feed sector. Producers will use less phosphorous on their crops, so excretion must therefore be less as well. This is a highly technical option with serious financial implications, pushing the price of feed upwards.

Last week, parliament agreed on the introduction of a phosphate quota coming into force in 2018. MPs demanded that farmers who have outdoor herds should receive a better deal than those with more intensive, indoor herds.

At the same time, parliament agreed legislation to prevent the development of farms with limited land, which is a contentious issue for the Dutch public. They don’t want dairy to become solely housed like the pig and poultry industry.

If the Senate agrees, this system will be introduced in 2018. Then Dutch dairy farmers will have to deal with a new quota system. The free market period which started on “liberation day”, 1 April 2015, will have lasted less than three years.

But the parliament’s proposals are not the end of the story. Everything now depends on Brussels. The first thing that has to be worked out is whether farmers should be allowed to spread 170kg or 230kg of nitrogen from manure. After that, the EU will have to decide on the policy for the next four years.

Parliament made it clear that it makes no sense to introduce the phosphate quota if Brussels refuses to promise the new derogation.

Dairy farmers are aware that once quotas are introduced, they’ll be here to stay. Other sectors know this from experience.

Nitrate quotas for chickens and pigs – originally a temporary measure – have been in place for more than a decade. Nothing is as definitive as a temporary regulation.

Case studies: Farmers tell their side of the story 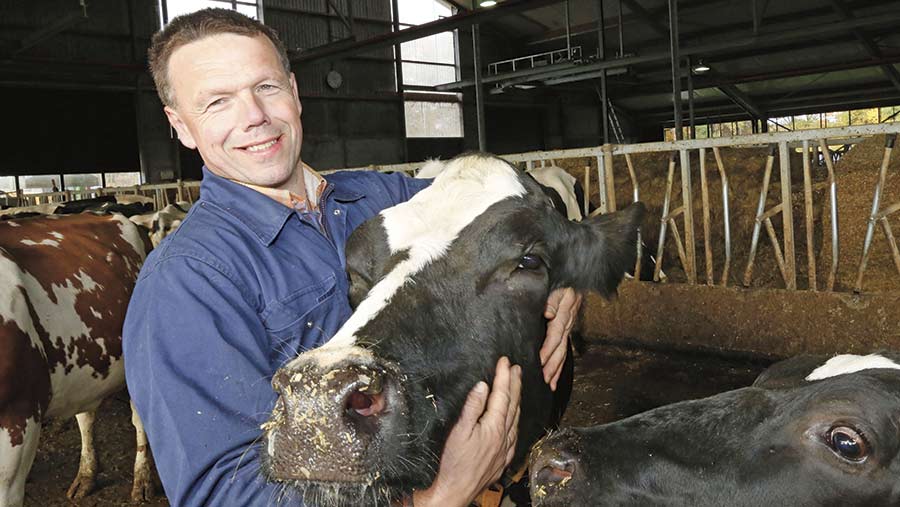 “Something had to be done,” says farmer Henk Aalpol from Enschede in the East of the country.

“The plans to reduce phosphate production are painful for me but more important is this: now we have clarity. We finally know what’s going to happen.”

Mr Aalpol, who milks 100 cows, would have to get rid of 10% of his herd under the proposals.

“The ones who are the least productive will go first,” he says.

He also hopes he can ‘swap’ some of his calves for milking cows. But he doesn’t have too much of a problem with it and he’s happy that finally he knows what he can expect and what his limits will be. 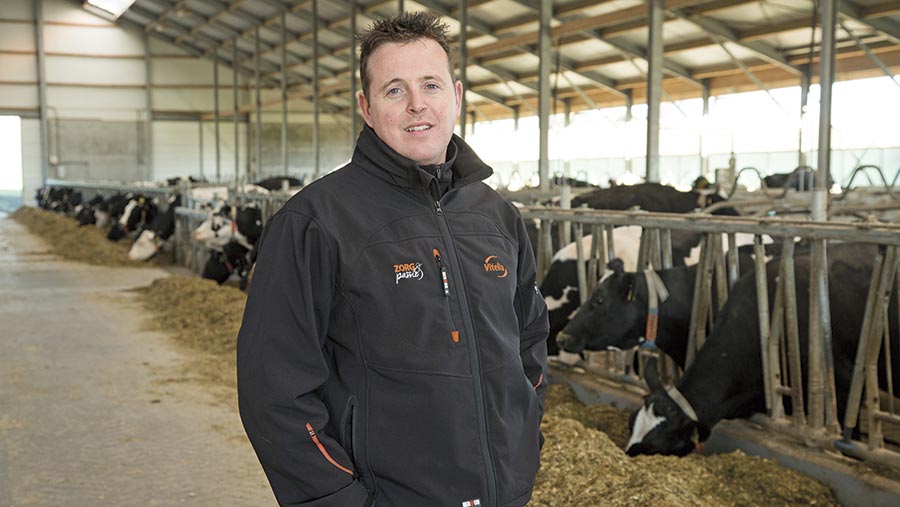 The fastest growers will be the first to feel the effects of the plan. Like Jurgen Conjarts, 34 from Margraten, in the extreme South of the country.

“We are a growing farm with a lot of own young cattle. Our milk production has gone up sharply since 2015.”

“In that time we built our new shed,” he said, but will probably have to sell these cows and probably many more.

Their financial plan is based on a production of 2.5m litres a year, but he already produces 3m litres. Because of this breathing space they can sustain some cuts, though Jurgen is very unhappy with it.

He hopes a lot of old farmers will decide to quit, so young farmers like them can benefit from the extra production space it will create.

Analysis: Will the Dutch crisis affect the UK?

High levels of production in the Netherlands and Ireland were widely viewed as key drivers of the recent dairy crisis – the worst in 30 years, writes Farmers Weekly reporter Jack Yates.

“There is already a shortage of milk in the EU, so any reduction in Dutch milk deliveries would put upward pressure on UK milk prices,” said Luke Crossman, senior analyst at AHDB Dairy.

“The effect on their dairy industry will depend on how staggered an approach they take to the cull, but production will undoubtedly be affected.”

The upsurge in cull cows that will likely flood continental markets early next year will have little effect on the UK beef market though, said AHDB Beef & Lamb senior analyst Debbie Butcher.

“Our two markets are not strongly related. Dutch beef is aimed at the manufacturing market, so it is unlikely demand for UK beef will be compromised.

“Countries such as Poland and France that have culled a lot of cows this year will be more affected.”