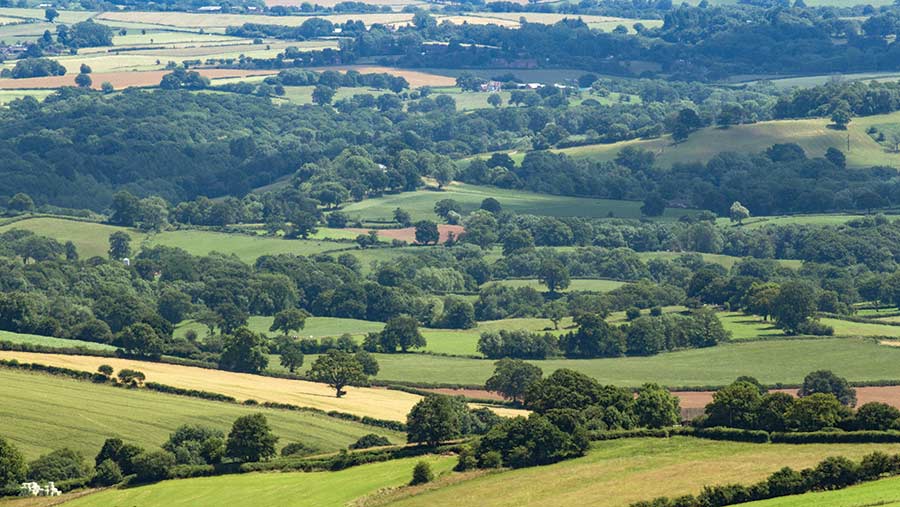 Keen buyers, limited supply and a background of endless uncertainty has characterised the land market this year.

Farmers Weekly’s land tracker shows 75,172 acres have been publicly advertised so far – a 33% reduction on the same period in 2018.

Though supply is low, other trends show there’s plenty to be positive about.

See also: What puts land and property buyers off farmland?

This trend has continued across the UK into August, with Scottish agent Galbraith reporting a dip in the number of units coming to the open market compared with last year.

In conjunction with a high number of buyers in the market, this has helped maintain land values.

As well as the usual factors for sale, such as retirement or a death in the family, some vendors have made the decision in order to restructure their business and invest money elsewhere, he said.

Debt is currently low on the list of reasons to drive the sale of a farm, according to Richard Nocton, partner at Woolley & Wallis.

Part of the reason land is not coming to the market is because of the uncertainty about Brexit – when and how it will happen – and how it will affect future farm policy.

Vendors find it hard to believe there is an active market for farmland and, in some cases, buyers are unwilling to commit to large capital investments, according to Carter Jonas’ Farmland Market Update for April to June 2019.

However, Galbraith has said farms and land in Scotland and northern England continue to be in demand despite the ongoing political uncertainty.

A good-looking house in a rural location is an attractive proposition for an amenity buyer, whereas any surrounding land could be considered an unnecessary extra expense.

Similarly, if a farm does not have enough land to stand alone, an agricultural buyer may be less interested.

Increasingly, the residential buildings and land parcels are being offered separately to appeal to both lifestyle buyers and neighbouring farmers.

Duncan Barrie, partner at Galbraith, said: “The smallholding and amenity land market is one of the most buoyant sectors, and this has a huge impact on the lotting of a farm in order that we can facilitate these interests.

“It is often the only option for some of the smaller livestock and dairy farms within central Scotland.”

Meanwhile, there is still a market for private sales, which generally work well where there are strong local or neighbouring buyers who have cash, said Mr Nocton, who believes the number of off-market deals has levelled out to about 15-18% of annual sales.

Land values are up slightly on the first quarter of the year but down overall year-on-year, according to Carter Jonas’ data, which covers England and Wales.

In Scotland, farmland values are stable, said Mr Barrie, but the gap between the best arable and more moderate arable land is not showing any signs of closing.

Mr Morshead, who is based in Northumberland, said bare arable land can achieve £8,000/acre if it’s well located, a decent size, productive and with good access.

The general consensus is that values are unlikely to fall off a cliff’s edge, said Carter Jonas, and though Brexit is currently affecting activity, the key fundamentals of owning farmland will not change regardless of when and how the UK leaves the EU.

Mr Morshead agrees and said: “We should be positive because what’s come on has sold well. Banks and lenders are keen to lend to farmers and people looking to buy land because it’s considered a sure investment.”

About 20% more farmland has come on to the open market in Wales in comparison to this time last year, in contrast to the slow supply elsewhere in Great Britain.

McCartneys has recently sold a 224-acre livestock farm for well over its guide price of £1.52m in the Welsh borders.

Jenny Layton-Mills, partner in the Knighton office, said as well as a lot of non-agricultural money coming in, farmers are still interesting in buying, depending on what it is and where it is.

“A lot of farmers are sitting in their holdings and waiting to see what happens with Brexit and farm subsidies,” said Ms Layton-Mills.

“As farms aren’t generally sold in winter anyway, we’re unlikely to see a turnaround in the market until February or March next year.”