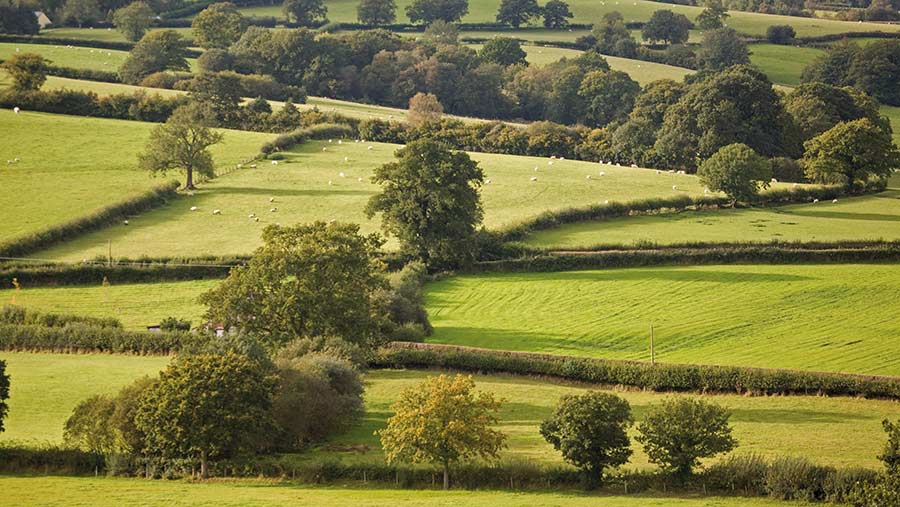 The strength of the UK land market remains clear to see in 2022, with huge demand and wealthy investors combining with limited supply to produce competitive bidding and high values.

Private sales remain popular, muddying the water of the available sales data, while environmentally focused buyers and funding schemes are bringing even more money into the market.

Meanwhile, economic difficulties and political tensions have created a tricky background for farmers to make decisions.

The cumulative advertised acreage has been down on the same seven days in the previous year every single week, peaking at -91% in February and improving to -7% in May.

Alex Lawson, head of rural agency at Savills, said there had been an increase in the supply of commercial farms this year, particularly in the eastern counties.

“20% of the farmland publicly marketed during the first six months of the year is related to farms of more than 1,000 acres, which, as a proportion of the market, is almost 10% higher than for the previous 10 years,” he said.

“The strength of competition for some of these larger units has led to offers over the guide price.”

Supply is likely to improve, say agents – especially with farmers considering the lump-sum exit scheme – due to more retirement sales, the need to raise capital for diversification projects, debt-related sales and some rebalancing of investment portfolios.

In addition to public sales, off-market transactions are still proving popular, which could explain the apparently decreasing available land volume.

Private sales provide discretion, flexibility and security, with agents having to act quickly to secure prime property in this way.

Often a premium will be paid to secure a farm off-market, but this is not guaranteed, especially with the current high demand and amount of competitive bidding.

Discussions with buyers this year have revealed overwhelming demand for almost every farm type across the country, said Richard Gadd, associate director at Fisher German.

Supply of good-quality, large-scale farms has been severely restricted in recent years, so where such opportunities do arise, there is fierce competition and some eye-watering values being paid, he said.

The majority of smaller residential farms offered by Fisher German through 2021 saw unprecedented viewing numbers, resulting in multiple cash-funded offers, and this is expected to be replicated to an even greater extent in 2022.

Non-farming buyers looking to capitalise on the stability of land values or environmental benefits are ever more prevalent in the market.

Wealthy private individuals have been incentivised to buy land in light of low (albeit rising) interest rates, say agents.

Values remain buoyant and some potential sellers are struggling with the conundrum of either taking advantage of the current high prices or holding on until they find the right property for them to move to.

According to the rural research team at Carter Jonas, average arable land values across England and Wales in the first quarter of 2022 saw the fastest year-on-year increase (5.2%) since 2016, reaching £8,889/acre.

Pasture land has also recorded strong growth – an average price of £7,261/acre reflects a 1.4% growth in value on the previous quarter and a year-on-year increase of 7.7%.

The huge increase in demand from multiple buyer types has seen a surge in lifestyle land values, which have recorded an 18.7% annual increase on the first part of 2021. In particular, south-east England saw a 48.1% year-on-year rise.

Agents say the non-farming interest in land for carbon offsetting and woodland planting is set to continue.

As the wider influence of natural capital unfurls and the Environmental Land Management scheme brings “green” money into the marketplace, land prices are likely to increase further, according to Carter Jonas.

Combined with rocketing input prices and labour shortages, this may result in some farmers being priced out of the market.

While there is more confidence in the market as the economic insecurity arising from the Covid-19 pandemic and Brexit fades, sizeable obstacles still exist, according to agents.

Concern about changing subsidy payments and new farm policy has been compounded by evolving geopolitical challenges resulting from the Russia-Ukraine war.

Where farmers and landowners are seeking to exit the industry over the next few years, they should take early advice, said Mr Gadd.