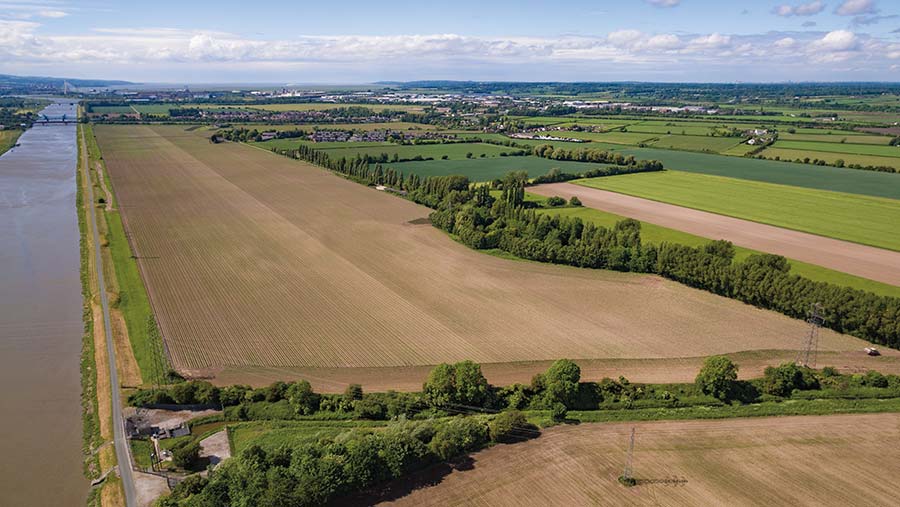 A flurry of launches across Wales and its bordering counties has sparked the region’s summer farmland market to life.

However, 12 months on, a variety of sales have been announced that will peak the interest of buyers looking for high-quality bare blocks, as well as traditional mixed units.

One of the most unusual offerings of the year comes in the form of a large block of Grade 2 Flintshire loamy clay soil capable of producing root crops and first wheat yields of 10.5t/ha.

The River Dee borders the largest of the four lots – a 150-acre parcel at Sealand Manor, Sealand, which has 306 acres in total. The smallest block is 37 acres.

On a smaller scale, Halls has brought a block of arable and grassland to the market 40 miles away at Bacheldre, near Churchstoke, Powys.

It will be sold in two lots – 22 acres currently put to arable and 30 acres of grassland oilseed rape – at auction on 14 September.

In Carmarthenshire, Carter Jonas is selling a 178-acre livestock farm with two houses either together or in two lots.

Ty Brych, Penmaen and Ty Uchaf at Llanddeusant is down to grass with grazing rights on a neighbouring upland common.

The houses are in need of renovation and it has a range of stone outbuildings suitable for livestock housing.

Roger Parry and Partners has two new instructions – one in mid-Wales and one on the England-Wales border.

Cynewill Farm near Welshpool in Powys comprises 242 acres of pasture, a traditional stone building plus Dutch barn and timber-framed shed.

A house is included in the guide price of £950,000 as a whole or in four lots, but entitlements are excluded.

Just over the border, the firm is selling a 283-acre mixed arable and dairy unit in the shape of Longslow Farm, Market Drayton, north Shropshire.

A well-equipped yard includes cubicle housing, a herringone parlour, 600t grain store and storage and sits centrally to the ring-fenced land, which is put to wheat, triticale and temporary and permanent grass.

It is being sold with a £5m guide price as a whole, but is being offered in up to eight lots, which could encourage farmers who are looking for bare land.

Opportunities not limited to Wales

One of the most progressive dairy farms to hit the Scottish land market for many years is for sale in Stranraer.

The unit, at Leswalt, now boasts cubicles for 340 cows and a fully automated dairy complex with Fullwood 24:48 swing over parlour.

Average yields have hit 7,200 litres with a 3.9% butterfat content and cattle can be grazed outdoors on the farm’s 380 acres from mid-February until November, with paddocks served by 2.3km of internal tracks.

Offers over £2.5m are being invited through Savills, and the sale includes a farmhouse and three-bedroom farm worker’s house.

George F White has a large upland beef and sheep farm in Cumbria as well as an investment portfolio in North Yorkshire for sale.

Horseholme Farm at Gilsland has 763 acres of pasture and improved upland grazing land and is capable of stocking 450 hill ewes plus 50 suckler cattle across its two steadings.

Available separately or as a whole for £4.475m, the combined 659 acres near Thirsk in North Yorkshire is mainly down to arable cropping, with some pasture to support the mixed enterprises.