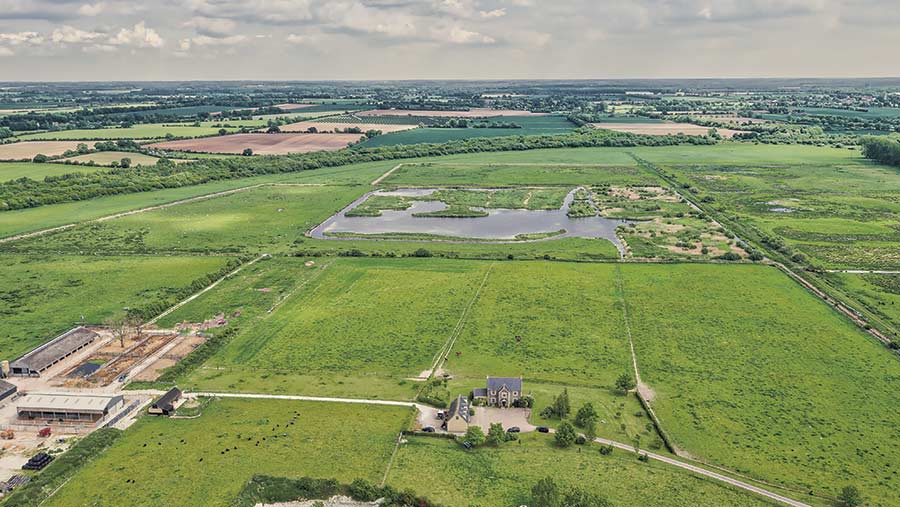 The first Norfolk livestock farm to be publicly marketed for five years has been launched with a £5.4m price tag.

Toby and Nicola Bulgin have spent a decade converting the highly productive soils at High Fen to grassland, with a significant commitment to wildlife and environmental stewardship.

Wetland areas they created and a Higher Level Stewardship Agreement help attract more than 100 species of birds every month, including some of the rarest sightings in the region.

“Flooding was a major issue so I put it to grass and we now have a lot of control over the water levels, which fits in with what we do around the environmental side.”

“Natural England calls our farm its flagship project. Sightings include a pair of black-winged stilts – only the second pair known to be nesting in East Anglia,” added Mr Bulgin.

The husband-and-wife team have 100 head of suckler cattle and 700 breeding ewes run across the 720-acre farm at Methwold, 14 miles north-west of Thetford.

Each week they slaughter two cattle and 15 lambs, using their own cutting room based on a 70-acre Essex holding, and sell the meat under their Beatbush Farm brand at London markets.

Toby told Farmers Weekly: “Livestock fit in perfectly with our environmental commitments because we need to graze the grass to the right levels for the birds.

“We go for a slightly later turnout and run lambs all winter to ensure we have a good size and throughput year-round.

“There is quite a lot of work in it, but we are set up so that if prices are dreadful we remain profitable.”

The farm has another eight years to run on a HLS agreement, which covers roughly 600 acres of the farm and is worth about £67,000/year.

“Yes, some will see the HLS as a limitation but I love working with the wildlife,” said Mr Bulgin.

The sale is being handled by Bidwells’ Norwich and Cambridge offices and includes BPS entitlements.

The farm has a 46m x 15m portal-frame lambing shed and a storage shed with flour milling facilities and a 60t grain bin.

The Bulgins recently built an additional 450sq metre building, complete with a state-of-the-art Bud Box cattle handling system, which opens on to the yard.

The five-bedroom farmhouse was built by the family in 2007 and has a separate office with a small conference room above.

“In a lot of ways I’ll be sad to go, but I’m at an age where I would like to do something with racehorses along with the farming.

“We’re definitely looking for another farm, but we don’t know where we’re going yet,” said Mr Bulgin.

Agents working across the county report Norfolk land values ranging from £6,000 to £14,000/acre.

But supply in the first quarter of the year was down on 2016.

Alastair Brown, partner at Strutt & Parker, said there is little sign of a glut of Norfolk land coming to the market.

“So far there has been a lack of supply of 500-acre plus residential farms and large commercial blocks, with most land sales being for 50- to 175-acre bare arable land parcels.”

He said average prime arable values were softening and some land is not selling.

Savills partner Christopher Miles said he expected supply to increase, but not significantly.

“Farmers have been selling off blocks of bare land and I see this trend continuing,” he said.

“Although supply will increase, I can’t see a deluge so opportunities for buyers will remain limited.”

Brown and Co said it had seen a number of bare land blocks of 150 acres and upwards come to the market across the county.

“Farmer buyers are more cautious than 12 to 18 months ago, but values are generally holding up for good offerings,” said the firm’s partner, Anne Barker.

“There has been a complete lack of good-quality residential farms on the market, for which the demand remains high.”