A record £205.5m was invested in the UK forestry market in the year to 30 September 2020, according to the latest Savills Spotlight report.

Up from £119m the previous year, the figure shows that interest in the sector is continuing its long-term growth.

As well as the traditional market drivers of capital asset appreciation and rising timber prices, evolving policy and action around the sustainability agenda has highlighted forestry as both a financial and environmental investment, the report said.

See also: How focus on environment over food will affect land prices

Despite this increase, the demand for forestry still considerably exceeds supply, and it is not uncommon for forests to sell in excess of 30-70% above the asking price, according to Savills.

The average gross forest value increased by 17% to about £4,695/acre, while the average price per net productive acre (minus tracks, rivers and lochs) rose by 11% to £6,070, according to Savills data.

However, in 2020 the area also achieved a regional high of £6,678/acre and reported the second-largest market share across Great Britain at 28%, with 14,031 acres sold.

Central Scotland saw a 24% rise in values to £6,700/acre and for a second consecutive year recorded the highest number of acres sold across Great Britain.

Government efforts to tackle climate change are key to the increased demand for woodland and land with planting potential.

The UK government has promised to reach an annual target of about 74,132 acres of new woodland creation by the end of its term, in line with the Committee on Climate Change’s net-zero recommendations.

The most recent ratified figures suggest 33,359 acres were planted in the 12 months to March 2020 – with efforts to March 2021 estimated at a similar amount – putting current planting rates at 45% of what is required, said the report.

The legally binding net-zero emissions target of 2050 for England and 2045 for Scotland has also put pressure on policymakers.

It is increasingly becoming mandatory for all large companies and financial institutions in the UK to be transparent about their climate risk, take accountability and address their carbon emissions.

This has resulted in a surge of interest in woodland carbon offsetting and thus the forestry market, said Savills. 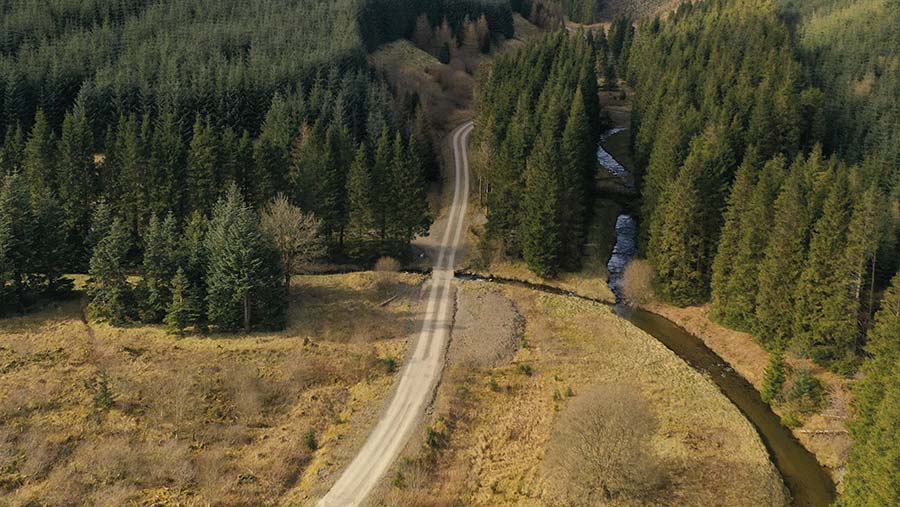 Ramsaygrain East Forests near Hawick in the Scottish Borders are on the market with Goldcrest Land and Forestry Group for offers in excess of £14m.

The 1,842 acres of prime commercial mid-rotation forestry is available as a whole or in three lots.