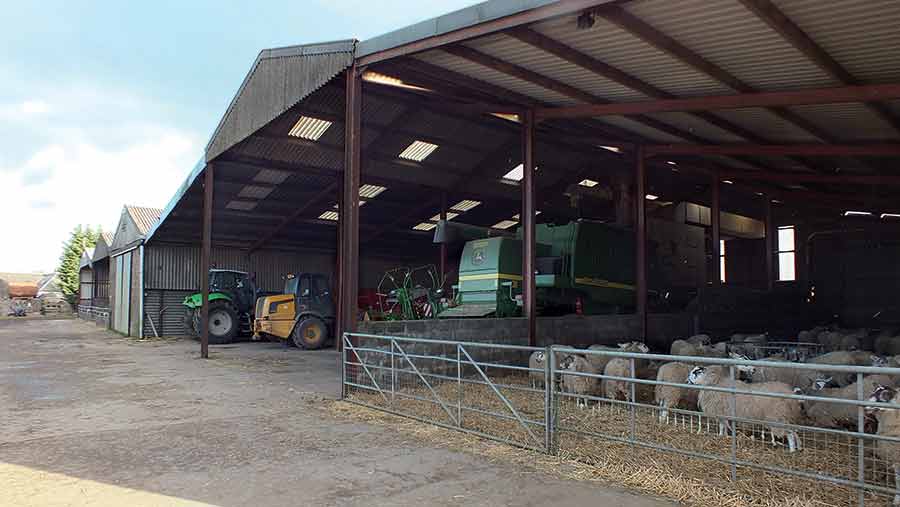 A range of mixed farms and stock-rearing units have hit the spring farmland market.

The largest is South Mains Farm, which lies 20 miles west of Edinburgh at Bathgate.

The 414-acre mixed holding has half its Grade 3 acreage in cereals and the balance carries 300 Scotch Mules and Texel crosses.

The farm’s modern, steel-framed buildings have been used for grain storage but double up as loose housing for livestock.

There is an established livery with 19 stables and arenas, as well as a two-bedroom farmhouse.

South Mains qualifies for Less Favoured Area Support and BPS entitlements are included in the guide price of offers over £1.83m as a whole, or in two lots. (Davidson & Robertson 0131 449 6212)

Near Winsford in west Somerset, 294-acre Upcott Farm is being sold for the first time in six decades.

Currently run as an upland beef and sheep unit, there are 15 buildings which are predominantly stone-built, providing storage and loose housing.

The permanent pasture is mainly level to moderately sloping, divided by fences and hedges, but there are steeper areas. Woodland, a pond and river frontage add sporting appeal.

Also in Somerset, Hurley Farm at Corfe near Taunton, has 109 acres of undulating pasture with an extensive range of buildings and a house at a guide price of £1.5m.

Equipped as a modern stock unit, the farmyard has three covered yards, a Dutch barn and other storage buildings set next to a five-bedroom farmhouse.

A 125-acre ring-fenced stock farm is for sale near Lockerbie. Bonshawside Farm in Kirtlebridge is currently in grass with some fields re-seeded in 2014.

The former dairy unit has grown barley but is now all down to pasture with a number of modern livestock buildings.

Greentree Farm, near Horsham in West Sussex, has 67 acres of pasture and 45 acres of woodland at a guide price of £1.95m.

The pasture is ring-fenced, accessed via a central track from the farmstead where most of the barns have been converted to equestrian use.

The managed woodland hosts a shoot and there is a well-stocked fishing pond.

A 50-acre grassland farm in the north of the county is for sale at a guide price of £1.4m.

The land at Rowley Farm is level, productive pasture divided in to eight fields, all well-fenced with water troughs. There is also an area of semi-natural woodland.

There is a five-bedroom house while the buildings include a Dutch barn, two steel-framed units, a former cowshed and a stable with hayloft.