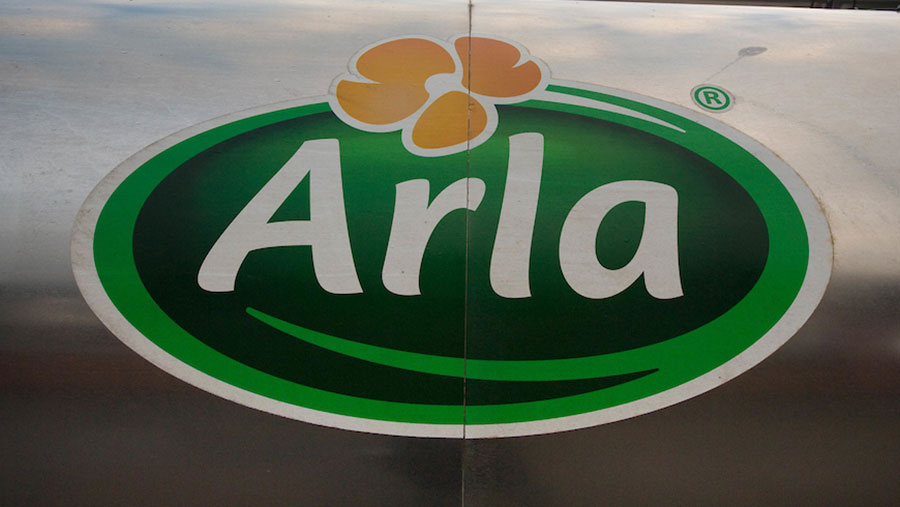 When converted to Arla UK’s manufacturing litre, the fall equates to a reduction of 0.89p/litre to 31.57p for milk with a constituent content of 4.2% fat, 3.4% protein.

“As highlighted at our recent round of regional farmer meetings, despite the current global market trends, Arla continues to deliver returns as a result of its transformational efficiency and cost savings programme, Calcium,” said Arla amba board director, Johnnie Russell.

Mr Russell added that the co-op remained focused on maximising returns from the market, which was being helped by initiatives such as the Arla 360 programme, an initiative introduced last month to increase producer welfare standards.

The move followed the majority of other major UK milk buyers, who have either dropped or held their December milk price so far.

For ease of comparison, Arla’s liquid litre price for milk with a constituent content of 4% fat, 3.3% protein is 30.35p/litre.

Arla organic milk prices will be increased by 1.79p/litre for December, however the EU exemption for using non-organic forage will remain in place at three eurocents/kg (3p/kg).

Last week, the Grocer revealed Morrisons, whose milk is supplied by Arla, was increasing retail prices for its own brand milk and Milk for Farmers ranges.

Morrisons’ Milk for Farmers range also increased its retail price, up 5p to £1.38 for four pints, while two pints increased by 6p to 97p.

Despite declining to comment on the reasons for the increase, the supermarket told Farmers Weekly the fixed price that goes to farmers from the brand remained unchanged.

Dairy commodity markets saw contrasting fortunes over the past couple of weeks.

The European butter quotation weakened further, dropping 5.4% in two weeks, while the SMP quotation saw four weeks of gains in the past five weeks, pushing it up by 2.9%.

The EU Commission’s sale of 30,000t of SMP seems to have lent some support, helping to ease the Intervention stock’s perceived burden on the SMP market.

SMP futures’ have also posted solid gains, with the December 2018 to March 2019 contracts gaining 2% on average since the start of November.

Butter futures meanwhile followed the European quotation lower, with the December 2018 to March 2019 contracts down 4.3% over the past three weeks.

SMP’s gains should help offset some of butter’s declines from a milk price perspective.

Looking outside of Europe, US October milk production remained ahead of last year while New Zealand production was up sharply (+5.8%) in October, (their peak milk producing month).

Negativity continued on GDT, posting its 11th decline in 12 auctions this week, down 3.5% as the strong production numbers seemed to weigh on market sentiment.