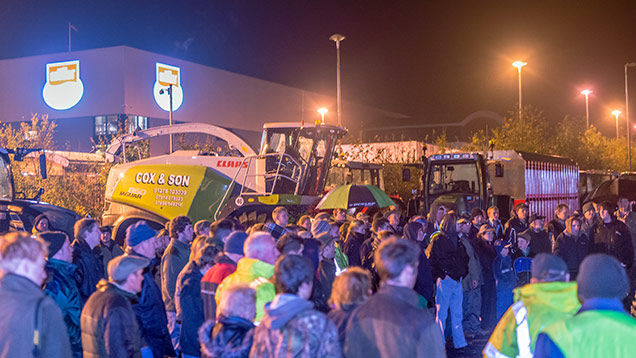 Lobby group Farmers For Action (FFA) led the protests at two Muller sites on Tuesday night (11 November) – at Market Drayton in Shropshire and Bridgwater in Somerset.

FFA said it targeted Muller again after it slashed its November milk prices by 1.9p/litre to 27.1p/litre.

The Muller Wiseman factory in Market Drayton was the first dairy processor the FFA targeted in its current campaign for fairer milk prices.

“Six weeks ago, Muller told us everything under the sun, that there was no money in liquid milk and how they lost £50m,” said Mr Handley.

“Why, if there is no money in liquid milk, are they buying Dairy Crest? We calculate that it would cost every Muller Wiseman producer £60,000 to fund the deal.

“But if you spoke to every single Wiseman producer and asked them if they would rather have £60,000 more this year, they would bite your hand off.”

Mr Handley added that Muller Wiseman had bought Dairy Crest for one reason alone – to make a massive profit.

“We’re not knocking what they have done, but we’re not pleased that they tell farmers there is no money in liquid milk and blast us for protesting, then six weeks later they roll out the chequebook for £80m.”

He said the current situation was unsustainable and dairy farmers would be exiting the industry in droves if the milk price pain continued.

Ahead of Tuesday’s protests, FFA members held a two-minute silence honoring the fallen heroes killed in conflicts since the start of the First World War.

Somerset FFA co-ordinator and dairy farmer James Hole, who farms near Wedmore and supplies milk to Arla, took part in the protest at Bridgwater.

He said: “Some dairy industry commentators have said dairy farmers must improve their efficiency of production to maintain profitability when milk prices fall.

“But efficiency needs investment which cannot be achieved without a sustainable milk price.

“Dairy processors are using the slump in global markets as the scapegoat for lower prices when 85% of the milk we produce is consumed in the UK.”

Mr Hole added that one Arla board member he had spoken to had told him that there was a possibility of further cuts in the milk price in January.

“If this doesn’t stop, the protests will just keep on coming,” said Mr Hole.

In a letter sent to the members of Muller Wiseman milk group, a spokesman for the company said Tuesday’s protests would “lead to further disruption at our dairies, adding cost at a time when the whole industry is under pressure”.

Ronald Kers, Muller CEO, said the acquisition of Dairy Crest would make a “more competitive, sustainable, efficient and innovative” dairy processor in the UK which will “generate real benefits for customers, consumers, employees and suppliers”.