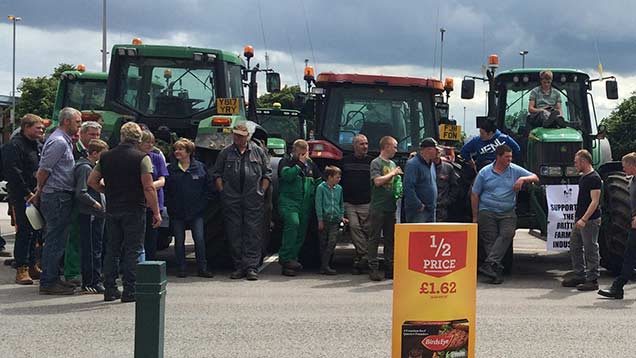 Farmers demanding higher prices for meat and milk told the public about their fight for survival during a peaceful protest outside a Morrisons supermarket.

A group of farmers gathered outside Morrisons in Stoke-on-Trent, Staffordshire, to meet shoppers face-to-face on Wednesday (29 July) and explain how low, unfair prices paid for their produce were devastating their businesses.

The farmers used a convoy of about 30 tractors to drive up the A50 from Sudbury, Derbyshire, to the supermarket in Festival Park.

The latest protest was organised by Staffordshire and Derbyshire United Farmers for Real Action – the same farmers who staged a rolling road tractor blockade on the A50 in Staffordshire last Friday (24 July).

Farmers fastened posters to their tractors featuring a picture of a dairy cow above the words “Supporting the British farming industry”.

Looks like the farmers are having a protest over milk and food prices at Morrisons, Festival Park. #stoke pic.twitter.com/GEnaBE3zAN

They told shoppers that milk and meat producers were feeling severe pain because of the brutal price war being fought between the UK’s major supermarkets.

As a result, many who supplied milk to supermarkets, such as Morrisons, were now being paid a price below the cost of production, driving many dairy farmers out of business.

A spokesman for the group said: “Morrisons boasts about selling milk at rock-bottom prices after it dropped its price of four pints from £1 to 89p.

“Morrisons gets its milk from Dairy Crest and Arla and we believe it is not doing enough to ensure farmers are paid fairly by the supplier. For example, Arla cut the standard price of its milk to 23.01p/litre from 3 August.

“Also, Morrisons does not have a price structure in place like Tesco and Sainsbury’s, which have their own structured pricing structure.”

In January, Morrisons said it would start recruiting farmers for its first dedicated liquid milk pool, after signing a contract with suppliers.

The supermarket said the scheme would involve the introduction of a contract that pays farmers a price linked to movements in dairy commodity values – but it has yet to materialise.

It is understood the NFU and other leaders of the dairy coalition were meeting with senior executives from Morrisons on Wednesday in a bid to seal a fairer milk price deal for farmers.

Darren Blackhurst, Morrisons’ group commercial director, said: “As a leading British retailer we are focused on delivering great value and we try to pass on lower prices to our customers wherever possible.

“We do however recognise that due to reduced global demand, this has created an oversupply of British milk creating difficult conditions for many dairy farmers at present.”