Dairy farmers blockaded the Muller factory at Market Drayton on Sunday night in protest over the company’s failure to increase milk prices in line with more positive market signals.

About 75 farmers are understood to have joined the demonstration, organised by Farmers For Action members, which disrupted the flow of lorries onto the site until midnight.

The producers met at Market Drayton auction market before moving on to the Muller site at about 8pm.

The action was prompted by Muller’s decision to hold its standard non-aligned liquid milk price for September at about 18p/litre. 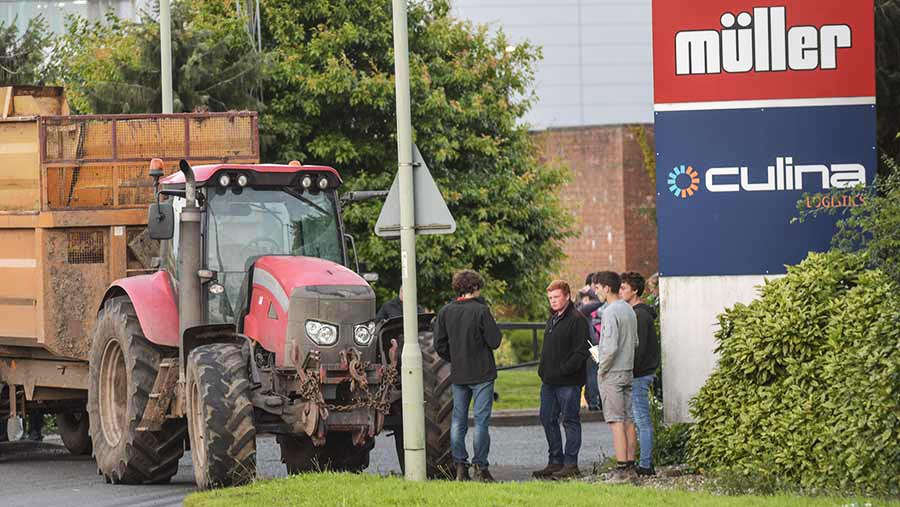 The move has angered farmers, who point out that when dairy commodity prices drop, farmgate prices are quick to go down. However, when commodity prices start to rise, some processors are much slower to pass the benefit back to farmers.

The NFU described Muller’s decision to freeze the price for another month as an “insult” to the company’s suppliers and completely out of line with recent positive market movements.

FFA chairman David Handley said the protest had been organised after a number of Muller producers called the organisation asking for help, he said.

“I think it is an utter disgrace that in 2016, farmers are being pushed into this sort of action again – in what is now a rising market,” said Mr Handley.

“We are not accepting that Muller isn’t going to pay more for September. It needs to pay more and unless we have some form of communication from them this week, we will be back in Market Drayton.”

Muller needed to explain how it could justify keeping the base price static when its formula price had increased by nearly 0.5p/litre, he added.

A statement from Muller said: “Disrupting a business with a track record for offering a competitive milk price to farmers and investing in the UK dairy industry makes no sense whatsoever.

“The organisers of this disruption are not suppliers and should not claim to represent the 1,900 farmers who do supply us.

“We will take whatever measures we can to protect our business.”