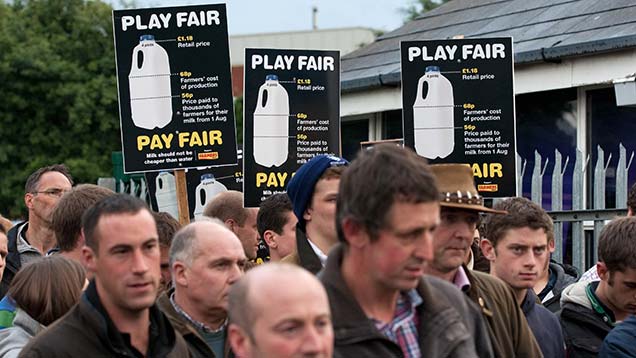 Hard-pressed dairy farmers are threatening to renew protests over milk prices amid fears of a mass exodus this summer.

Lobby group Farmers For Action (FFA) said tensions had been bubbling up for weeks among producers who were being forced out of business due to continuing low prices.

No details of targets have been released, but it is understood that protests could be renewed as early as next week.

“A lot of people are hoping prices will improve in the summer. If they don’t, I think we could see one-third of dairy farmers quitting by January/February.”
Paul Rowbottom, FFA

Paul Rowbottom, FFA co-ordinator for Derbyshire and Staffordshire, described the situation for dairy farmers as “the worst he had known in 25 years”.

“I have never seen the depression I am seeing now. This is worse than the dairy crisis in 2012,” he added.

“Farmers have been told to produce more and more, but many are producing milk below the cost of production and therefore survival.

“A lot of people are hoping prices will improve in the summer. If they don’t, I think we could see one-third of dairy farmers quitting by January/February.”

Somerset dairy farmer James Hole, from Heaphouse near Wedmore, said he would not be surprised if protests started again.

“We have got the elite of farmers still at 32p/litre on cost-of-production contracts. They are driving forward and putting more cows on because they are being paid more for their milk,” said Mr Hole, who is also Somerset FFA co-ordinator.

“At the opposite end of the spectrum, we have got farms on 16-17p/litre. Their figures don’t stack up and they are thinking: ‘The best thing we can do is get rid of the cows.’”

Dairy farmers were looking to invest in milking parlours and sheds to make their businesses more efficient, he added. However, low prices were hampering investment plans and therefore many were thinking about “chucking the towel in”.

A dairy consultant, who advises 700 dairy farmers in the South West, told him that some 200 of these were thinking of quitting dairy unless there is a turnaround in their fortunes before the end of summer.

“First-cut silage is coming to a close and farmers will be ready for action if needed,” said Mr Hole. “I think we are in serious trouble.”