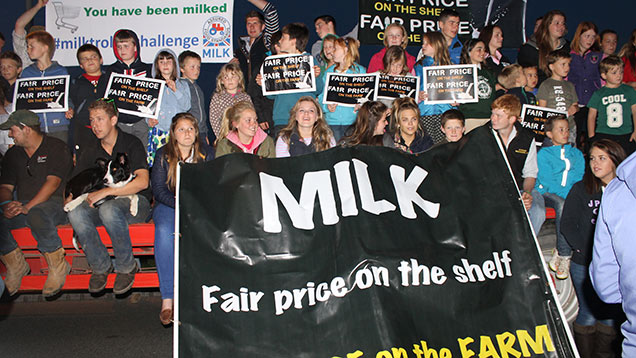 Morrisons has agreed to hold fresh talks with dairy industry leaders after farmers protested at two of its milk distribution centres over falling prices.

A massive turnout of more than 500 farmers at Morrisons’ distribution centre in Bridgwater, Somerset, led to board director Martin Jones phoning Farmers For Action (FFA) chairman David Handley and agreeing to a meeting with the FFA and NFU.

FFA chairman Mr Handley told farmers gathered at the protest: “This meeting will be in respect to your demands and nothing else. We want to make it clear that we are not their slaves and they are not our masters.”

Somerset farmer and NFU livestock board member James Small said: “This is a huge step to bring our thoughts to the table.

“You have made your point, now it is time to have the discussion and come up with some answers, or we will be back where we started.”

The protest saw a huge turnout of men, women and children outside Morrisons’ distribution centre on Thursday night (6 August), with tractors and farm machinery preventing lorries from going in and out for about five hours.

The protest took place at the same time as a demonstration was held outside a second Morrisons depot in Middlewich, Cheshire, attended by NFU president Meurig Raymond.

Farmers protesting in Bridgwater were keen to emphasise the urgency of the problems affecting the dairy sector.

“We don’t have long to turn things around,” said James Hole, Somerset representative of the FFA.

“It is not a matter of weeks or months, we literally have days. Our roots and our future are what we are fighting for.”

Some of the protesters present were Becky Robertson and Nick Thompson, who are credited with starting the “Milk Trolley Challenge”.

“We based it on the ice bucket challenge,” said Miss Robertson.

“We wanted it to go viral the same way and I think it has made a huge impact towards tonight. I am so proud of how other farmers have taken it up.”

Mr Thompson added, “I just want to help the younger generation to have a future. Without us there is no future for farming, and without farming, we have no future.”

Stuart Lay, of Howsworthy, Devon, was another protester keen to get the message across to the public.

He had already taken part in a protests at Morrisons stores in Bude and Bideford where he had taken a cow to meet the public.

“We have targeted Morrisons specifically because they are selling milk as a loss leader for their own gains.

“We need to get publicity to raise awareness so we can get a fair price for milk.

“ If I could speak to the board director now, I’d say, ‘You don’t understand the hard work that goes into that single litre of milk, it is not a loss leader’.

Collin Wrayford, of Newton Abbot, Devon has a 250 dairy herd and is the last dairy farmer left in his village when 20 years ago there were over 10.

“We are all suffering at the moment. I have been farming for 38 years and I worry for my son’s future. I hope we can educate the public with our protests without losing their sympathy.”

Mr Handley added: “We have been bullied enough and there is only one way to treat a bully, smack him back between the eyes.

“There are to be no more protests against Morrisons until the meeting with them next week but we will be back if they renege on any deal. In the meantime there are still plenty of other retailers to have a go at.”

Summing up the protests, an FFA spokesman added: “Following all the recent activity in the last seven days, with Milk Trolley Challenges originated by young farmers, and protests held in Cheshire last week and again last night Cheshire (600 in attendance) and Bridgwater in Somerset (1,000 in attendance), Morrisons are to meet within industry leaders on Tuesday next week to discuss the serious issue facing British dairy farmers.

“We would now please ask everyone to focus their attention on other retailers while talks with Morrisons take place.

“Well done last night to everybody, both young and old.

“Your support was fantastic, behaviour was exemplary, and obviously a big thank you to all our other partners who have played a part in the last seven days, focusing on the plight faced in the British dairy industry.

“Not forgetting all the generous sponsors, who have been so generous throughout this campaign.

“Young Farmers, your conduct and behaviour has been a tremendous advert for our industry and you and your families should be duly proud of you, as we all are here at FFA.

“Please keep up the support, this is just the beginning but together we can make a difference and we will.”