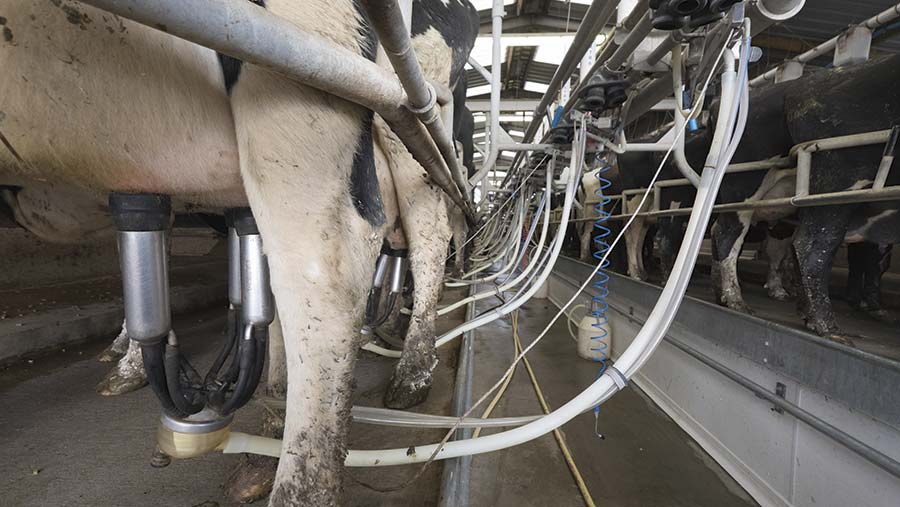 Top-performing dairy farms made almost 9p/litre profit in the year to the end of March 2017, while the poorest performers lost 13p/litre.

This was despite the bottom 10% receiving an average milk price of 25.76p/litre, which was 0.77p/litre more than the top producers, according to a report from accountant Old Mill and the Farm Consultancy Group (FCG).

These figures are before rent, finance and single farm payment are taken into account.

One of the main reasons for the profit gap was a much higher spend by the bottom 10% on purchased feed, at 8.73p/litre compared with 4.07p/litre for top producers.

The average profit, excluding rent, finance and the single farm payment, for the year ending March 2017 was 0.28p/litre, 74% below Old Mill’s original predictions. “[The overestimate] is purely down to the extended period of low milk prices,” said Mike Butler, Old Mill chairman.

“Farmers cut expenditure as far as possible, in areas like property repairs and variable costs, but there was only so much they could do to offset the catastrophic milk price.”

The report predicted milk prices would average 29p/litre in the current milk year (to the end of March 2018), with comparable profit rising to 3.1p/litre.

“Efficient businesses should be able to generate a profit of about 3p/litre, with the more efficient operators sitting above 5p/litre,” said Phil Cooper, partner at FCG.

Little change was anticipated for dairy farms cost of production at 29.19p/litre (including imputed costs of £30,000 for unpaid labour), with feed and fertiliser prices dropping back while other areas increase.

“We would expect to see increases in vet and medicine costs as more businesses start vaccinating stock, although some of this should be offset by a reduction in dry cow therapy as milk buyers encourage selective dry cow treatments,” said Mr Cooper.

“Silage costs are expected to increase due to the good grass growing year. And depreciation could rise slightly as renewed confidence leads to increased investment.”

With current predictions showing a shortage of milk going into the winter, there are plenty of reasons to be optimistic, he added.

“That said, it is important to continue to focus on making your business more efficient.”

“The focus should now be on holding the line – the market is pretty balanced at the moment and the danger is the more prices go up, the quicker they could come down.”

Mr Walkland said the market was still experiencing a slight shortage of butter, which should protect prices until January. At that point demand factors would be crucial in determining returns as production increased leading up to the flush.

“All the drivers are pointing towards rising volumes next year, which could put pressure on prices.”

“As EU production volumes ramp up, it is vitally important the block maintains its current level of exports to help prices.”

Producers should also take note of the recent decline in cream and butter values and the forecasted milk futures price (UK Milk Futures Equivalent), which stand at 26-27p/litre for April-September 2018, said Nick Holt-Martyn from the Dairy Group.

“With markets softening on the back of improved EU supply it may be that futures contracts and forward prices are less attractive.

“Dairy options may have more to offer with their insurance-type minimum price guarantee.”