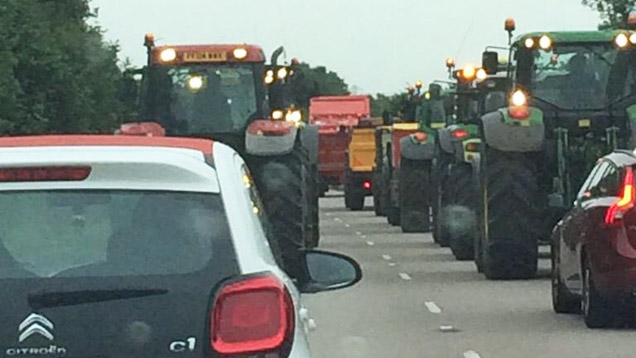 British farmers, furious about falling milk and lamb prices, have used tractors to stage a rolling rally on roads across Staffordshire and Derbyshire.

Dozens of fed-up farmers from across both counties took part in the peaceful demonstration, which focused on the A50 road in Blythe Bridge, Staffordshire, on Friday (24 July).

The tractor procession later made its way from Uttoxeter, towards Foston, in Derbyshire.

The action was co-ordinated by “word-of-mouth” and was not led by any specific organisation.

About 40 farm vehicles, including tractors, combine harvesters, balers and 4x4s, were blocking the carriageway around lunchtime on Friday.

A Staffordshire Police spokeswoman said: “Motorists are being urged to seek alternative routes due to long traffic delays caused by an ongoing protest by a group of farmers.

“The A50 is blocked from Blythe Bridge towards Stoke-on-Trent due to a large number of very slow-moving farm vehicles. Officers from Staffordshire Police are at the scene.”

“Farmers are at the end of their tether with milk prices where they are at the moment,” she said.

“We have seen what has been happening to farmers in France. It’s the same thing here. Everyone is riled, but everyone wants to do something about this now.”

Mrs Allen milks 150 cows and farms a 350-head herd with her partner on a tenant farm in Cheadle.

They receive 24p/litre for their milk. But from August, the price will drop to 23p/litre.

“The last few months have been crap,” she said.

“We have had to cut back no end. We are only just affording to pay the bills.

“Before, we would split them in half, but now we are splitting them into three and four payments.

Delays on the A50 eastbound between Blythe Bridge and Uttoxeter due to tractor convoy protesting farmers about food subsidies.

“Everyone is suffering. It’s not just the farmers, it’s the vets, the suppliers, everyone. If it goes on like this any longer, soon there will be an animal health issue because farmers will not be able to pay for their vets.”

Where is the NFU?

Mrs Allen called on the NFU to raise its game and help farmers who were desperately battling to stay alive.

“It has been 12 months and we have had four meetings. We have hardly heard anything. It is all going on behind closed doors,” she said.

“What do we pay a subscription to the NFU for? They are supposed to help us when times are bad. Where are they?

“They are too busy going to Brussels. They ought to sort the mess out in their own country first.”

Mrs Allen accused the government and British retailers of standing by and watching farmers suffer.

“The government has got to step in. I know they cannot set a price, but they have got adjudicators,” she said.

“But what exactly has the supermarkets ombudsman done? As far as I’m concerned, she has done nothing for farmers.”

The countryside was being neglected and David Cameron’s government was “not doing enough” for rural issues, she added.

Not just dairy feeling the strain

Another Staffordshire dairy farmer, called Rob, stressed that it was not just dairy farmers who were feeling the pain.

He said: “We have got to the point where farmers from all sectors cannot go on any longer like this.

“Our backs are against the wall. We are losing money hand over fist.

“They used to give us a price to cover cost of production. But it is costing us money to produce food now.

He added: “We feel as if we are on our own. There is a lot of anger and depression in the industry.

“The processors and retailers are all making a margin and they are expecting the farmers to leave with a good view.

“It’s all down to the supermarkets wanting to sell cheap food.

“We are selling a quality product, but we are being made to feel like we are selling rubbish. The Arla price drop today has caused no end of anger.”

NFU chief dairy adviser Sian Davies said: “Dairy farmers across the UK are struggling after months of milk price cuts, the latest from Arla today. We know there’s no respite in the short term but taking direct action in this way is not going to help overcome current market issues.

“Instead we’re working with FFA and TFA to identify and publicise bad practice in the supply chain, increase consumer support for British dairy and provide short-term support to those that need it.

“While this is a global downturn in dairy markets, there’s much more that can be done in the UK dairy supply chain to ensure fairer returns to our hard-working farmers.”

Farmers For Action also distanced itself from the protest, issuing a statement on its website which said: “Although we understand the frustration and anger of those who today have been protesting on the A50, we feel very strongly this will not benefit our cause in the short term.

“The last people we should be dragging into our argument with retailers, food service industry, milk processors and the government is the general public, who at the end of the day are our consumers who put the money in the tills that comes down the supply chain to pay for our marvellous products.”