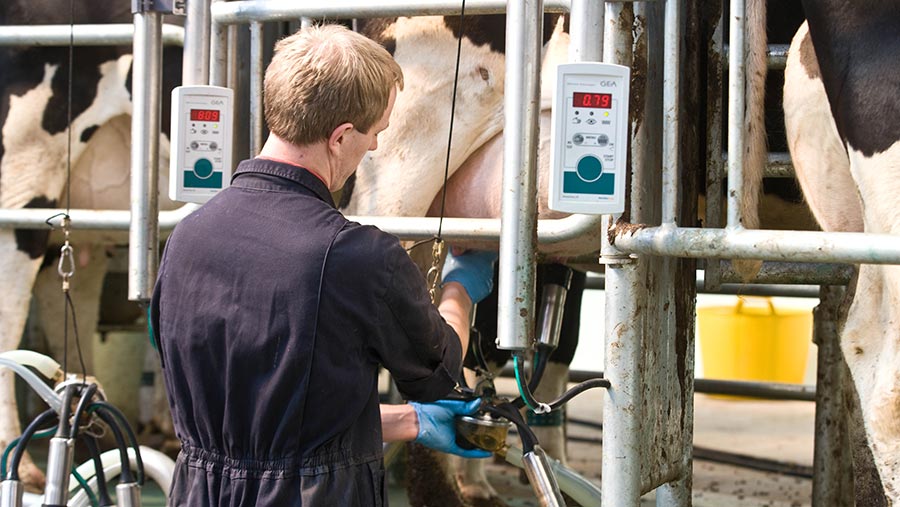 Dairy farmers are receiving conflicting messages about whether to pick up milk production as milk prices continue to rebound.

Both Arla and Muller have announced milk price rises for July as well as August, which will see their farmgate prices for liquid milk rise to 27-28p/litre.

However, Mr Walkland warned farmers not to ramp up milk production as values could easily decline.

“When prices are high, you lot [farmers] go nuts, so will the milk volume kill the goose that lays the golden egg? Will you overproduce? Prices will come down as milk volumes go up,” he said.

Instead of “chasing the peaks”, Mr Walkland said farmers must “go for longevity” to make money in the long term.

Tony Evans, a partner at the Andersons Centre, said unless farmers had an assured price on the milk they are producing, they would be “stupid” to ramp up production.

Mr Evans said milk prices are about 6p/litre lower now than in 2014 when they peaked at 34p/litre before the price crash. Feed and concentrate costs are also higher, as is the cost of buying cows, both in the UK and from abroad.

“Most people would be better off focusing on improving where they are already,” he added.

Michael Oakes, NFU dairy board chairman, said confidence in the sector was “fragile”, adding: “If we go ‘boom’ now before Christmas, we could go ‘bust’ again next spring.”

Mr Oakes said coming out of the dairy crisis, some farmers would be feeling pressure from their banks to expand production.

But he added: “We need a change of attitude in the supply chain. Farmers need to develop a better relationship with the processors to make sure we are giving them what they want.

“They [the processors] need to give us indicators about where the market is going and share the risk – not put it all down to us.”

Dairy farmers are reacting differently to signs of a recovery in the market.

Somerset dairy farmer James Hole says he will adopt a responsible approach for the remainder of 2017 and not overproduce milk.

Mr Hole, an Arla representative and supplier, said he eased off milk production when prices were bad and reduced his herd of Holstein Friesian-cross cows from 280 to 240 cows.

“I’m at the stage where I’m reaping the rewards of that. Most of my cows are in calf – I have calved 40 in the past month.”

The herd is milked twice daily and it produces 135,00 litres/month on average.

But with prices set to rise, Mr Hole has no plans to ramp up production. Instead he will talk his milk buyer Arla and produce what is required.

“It’s about producing milk responsibly, looking at it at cost per litre, rather than just producing more,” he said.

“Should we choose to go boom, we will very quickly find out what bust is again.”.

North of the border, however, there are indications that more farmers will expand production.

One farmer, who farms 400 Holstein cows in Dumfriesshire, said he increased production by 5% last year, and plans a bigger increase over the next 12 months.

He said he knew others planned to do the same.

“It’s a natural instinct that when prices go up, farmers will be looking to produce more milk,” said the farmer, who did not want to be named.

“Whether it’s in the long-term interests of the industry, I’m not sure.”