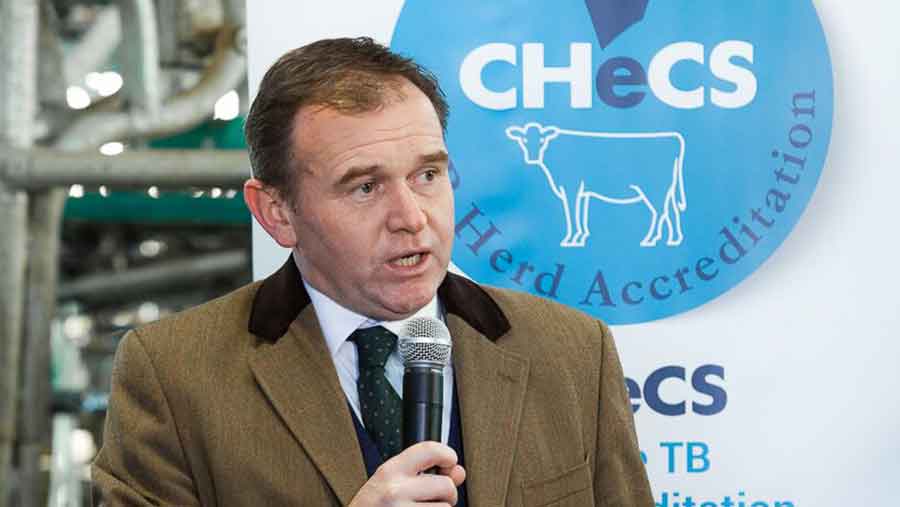 Farm minister George Eustice has questioned the validity of the milk protests and warned that blockades could be counter-productive to the UK dairy industry.

Giving evidence to the Environment, Food and Rural Affairs (Efra) committee on the present dairy crisis, the minister said he understood the frustrations of dairy farmers, who are struggling to cope with plunging milk prices.

However, Mr Eustice said they had to be “careful” with protests and insisted the situation dairy farmers faced had not yet sunk to the depths of the SOS Dairy crisis in 2012.

Although milk prices were low, they had not yet fallen as low as in 2012, he said. The “key difference” was feed prices are about 30% lower now than they were back then, he added.

Mr Eustice said producers who don’t have expensive overheads were finding they were “just about able to break even” with current prices. But those on intensive systems, with higher inputs, will be losing money.

He pointed out that the processors were also trying to deal with a global fall in commodity prices, but milk production in the UK had increased by 8-10% in the past 12 months.

“It’s one thing to have protests, but where you have problems of maybe lorries being blocked and the whole operation of a business being blocked, that can actually be counter-productive to the industry.”
George Eustice

“It’s not necessarily the processors’ fault in this instance that they are not paying at the right price,” Mr Eustice told the Efra hearing at Westminster on Tuesday (2 December).

“I think two years ago there was a real issue of some processors not dealing fairly with their suppliers. Since we’ve got the dairy supply chain code in place, I think that’s less of an issue now.”

Mr Eustice said he wanted Britain to be “open for business” and while the long-term prospects for the dairy industry were good, in his view, direct action did not send out a good signal.

“Some of these processors are big pan-European, or even global, companies. They will feel that in Britain they are going to get sometimes quite aggressive protests that disrupt their business,” he explained.

“It’s one thing to have protests, but where you have problems of maybe lorries being blocked and the whole operation of a business being blocked, that can actually be counter-productive to the industry.”

Mr Eustice raised concerns about the effect of supermarkets selling milk as a “loss leader” at 89p for four pints.

“Once you create a culture and an expectation of low retail prices for milk, you may be making it harder for things to return to normal,” he said.

Furthermore, some smaller retailers who were not in a position to shoulder the cost of such promotions would feel obliged to match them and “were unable to do so without exerting a downward pressure on farmers”.

The minister said it was not the grocery code adjudicator’s job to deal with issues between the producer and the processor.

The dairy supply chain voluntary code of practice, he added, was there to “police the relationship” between the processor and the farmer and a recent review by Alex Fergusson, MSP, had shown it was “working well”.

However, the minister said he did not support the idea of the voluntary dairy code becoming statutory because the ability of farmers to walk away from a contract with three months notice would be lost.

“To me, making a market work properly between farmers and processors does require a situation where farmers can say: ‘This isn’t good enough, I’m going to walk away.’

“In my view, that’s been the single most powerful element of the code in terms of getting some of those processors to respond.”

Mr Eustice said the dairy industry had been through a “rollercoaster ride” since 2012.

But he described the current situation as a “short-term blip” and insisted the future prospects for the industry were good, as annual global dairy demand was expected to grow by 2-2.5% over the next decade.

Mr Eustice said the government was trying to boost the UK dairy industry by opening up new export opportunities to sell cheese to countries such as Brazil and China.

Over the past two months, farm lobby group Farmers For Action (FFA) has held a series of blockades outside dairy and supermarket distribution centres to protest against falling milk prices, which have dropped by as much as 8p/litre (30%) in the past few months.