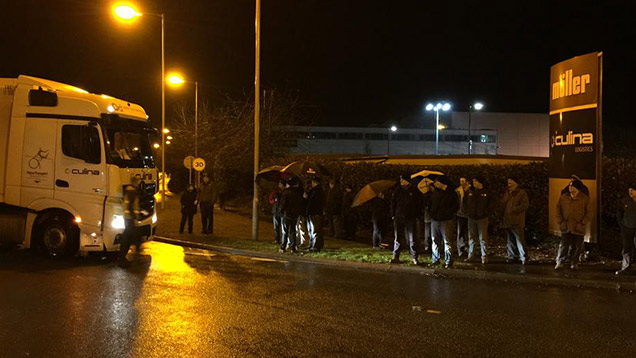 Dairy farmers are threatening further protests against Muller Wiseman unless they are given unfettered access to the company’s accounts.

In the letter, FFA chairman David Handley has requested “free access” to Muller’s books so that British farmers “can be assured that all monies due are being paid”.

Somerset dairy farmer and FFA co-ordinator James Hole, from Heaphouse near Wedmore, said the response from Muller would determine whether dairy farmers carried out more blockades against the company.

“Muller Wiseman has contacted us to say that all the managers are in a board meeting to discuss the questions we raised last night,” Mr Hole told Farmers Weekly on Friday (12 December).

“We have been told that an email will be on its way. We are waiting to see what that email has to say. Then a decision will be made (about further protests).”

Muller Wiseman has announced its milk price will drop by 1.2p/litre to 25.9p/litre from 10 January, as world production keeps running above demand.

The FFA warned the latest round of milk price cuts would have a catastrophic effect on dairy farmers, who are producing milk at a loss.

FFA chairman David Handley has questioned Muller’s claims that they are not making any money out of liquid milk after the company recently announced the £80m acquisition of Dairy Crest.

Dairy farmers believe they should be owed millions in “missing monies” and believe the UK should be more immune from global dairy commodity slumps as 80% of liquid milk produced in this country is used here.

Both protests ended at around 2.40am on Friday (12 December).

Muller Wiseman was unable to be contacted for a comment on Friday afternoon.

FFA Derbyshire spokesman Paul Rowbottom said Dairy Crest was targeted after it slashed both its liquid and manufacturing January prices by 1.25p/litre, taking them to 25.79p/litre and 27.27p/litre, respectively.

He added: “Farmers are in such a state. They cannot carry on at these prices. There are farmers who are booking dispersal sales and giving up.

“People are devastated. They don’t know how they are going to pay the bills. The SFP has come in, but it has gone just trying to keep up.”