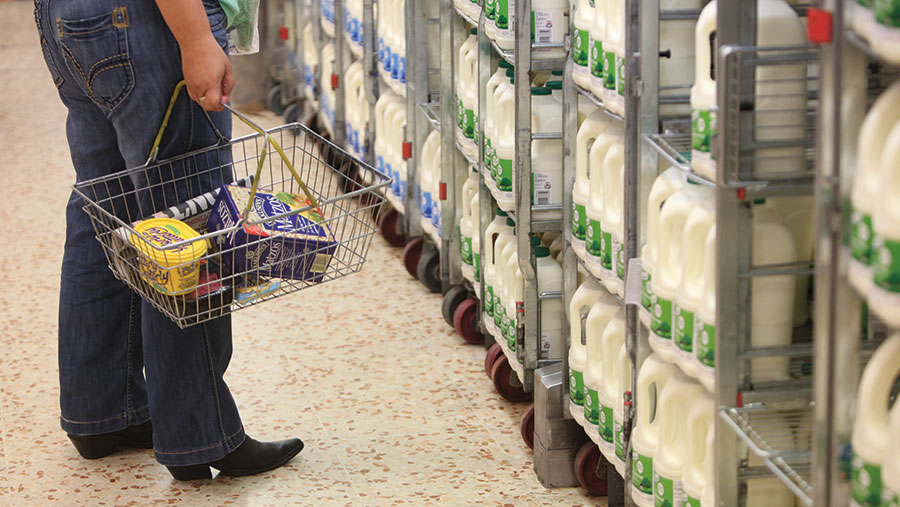 Bumper UK dairy sales figures have shown that the sector increased in value by 4.5% to £10.7bn in the 52 weeks ending 31 December 2017, according to the latest data from Kantar Worldpanel.

Despite higher retail prices partially driving value rises, the news of increased sales volumes of fresh milk and cheese will bolster the industry as it celebrates the #Februdairy social media campaign this month.

Total UK sales values and volumes both increased for milk and cheese, with only butter volumes sold by retailers declining as a result of huge price spikes in 2017.

Milk sales volumes were up by 1.6% over the 52-week period and the 98% of households that bought fresh milk did so more frequently than the year before, despite having to pay higher retail prices, according to Kantar.

This success was emulated by cheese, which, driven by the impressive performance of cheddar, achieved sales of £2.8bn, 3.5% higher than in 2016.

The 98.6% of UK consumers who purchased cheese in 2017 bought an average of 16.4kg each in 2017, according to the Kantar Worldpanel figures.

The substantial increase was the result of record butter prices, which averaged £5.35/kg over the period, 23.5% higher than the same period the previous year.

Sentiment in the UK dairy industry was further bolstered by strong cheese exports figures for January to November 2017, increasing by 3% on the year to 153,000 tonnes, according to AHDB Dairy.

Driven mainly by cheddar sales, increases in shipment volumes were seen both inside and outside the EU, with non-EU sales now accounting for 19% of total UK exports compared with just 10% in 2012.

AHDB analysts stressed that although export growth is positive, it is crucial that the industry retains its competitiveness in existing markets.

UK markets remain strengthened by the continued weakness of the pound against the euro, which has also helped the UK beef market in supporting dairy cull and calf prices.

Electricity and diesel prices are now rising, despite the low oil price having constrained them until recently.

However, UK farmgate prices have continued to slide back on the back of falling dairy wholesale prices and production increases on the Continent.

Butter, cream and cheese have all rolled back to the level of last spring’s market trough, with market returns down by 16% since August 2017, according Nick Holt-Martyn, principal consultant at the Dairy Group.

“Currently the forecast is for supply to rise further through 2018 to give a strong summer peak leading to weaker market returns throughout the year,” added Mr Holt-Martyn.

“Production is still rising rapidly in the EU and market returns have fallen, so the prognosis for farmgate prices in 2018 are poor.

“Unless EU production is curtailed before the spring, prices will continue to fall. The farmgate price fall will echo the fall in market returns of 16% and with EU supply at +6% and global at +4% a sharper fall can’t be ruled out.

The latest figures for Andersons Friesian Farm model showed dairy business margins were set to fall by 1.8p to 5p/litre in the 2017/18 season, driven by a decline – but not collapse – in milk prices.

The formal date of Brexit will coincide with the end of the 2018/19 milk year, so producers need to use current profits wisely to prepare themselves for what a future outside the EU may bring, stressed the consultancy.

Andersons added that operating at today’s average levels would not be good enough in the future, and UK dairy farmers should continue to strive towards the lowest cost of production, ensure calving systems are the most efficient they can be and scrutinising every element of farm spending.

The outlook warned that the days of BPS are numbered in England at least, and current payments should be spent preparing businesses for a world without support.