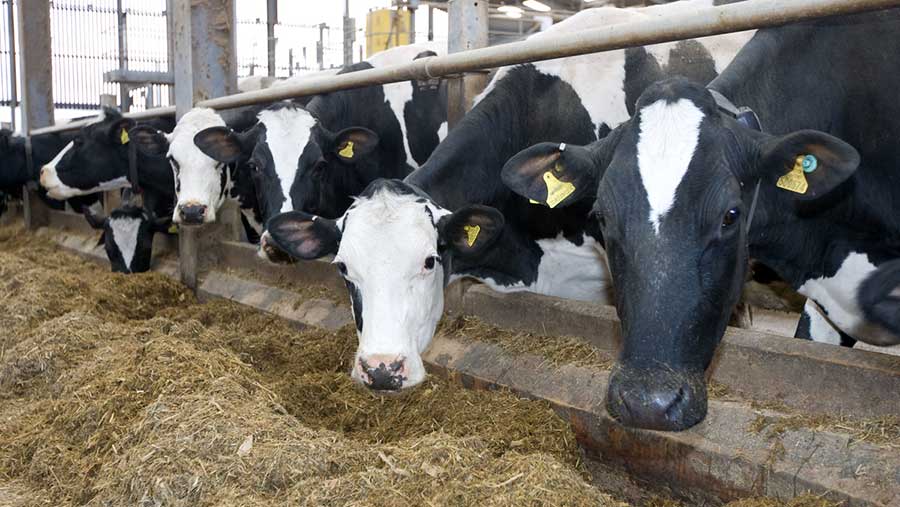 Punishing cuts in milk prices are hampering the ability of even the most efficient UK dairy farmers to farm sustainably, according to AHDB Dairy.

Analysts from the levy board said reductions in farmgate milk prices, especially over the past six months, have inflicted serious pain on dairy farmers, including those running effective  businesses with low costs of production.

According to Defra, the average price paid to UK dairy farmers in December was 23.71p/litre. On average, milk costs about 29-30p/litre to produce.

Historically, when dairy farmers have been subjected to fierce cuts in the milk price, they have been able to mitigate the effects by relying on profitability from better farming years or the prospects of an upturn in fortunes.

But analysts at AHDB Dairy say the dairy industry is experiencing an unprecedented slump in which even the most efficient dairy farmers are feeling the pain.

The levy board has released pie charts analysing the self-sustainability of dairy farm businesses based on their output, which includes milk sales and other dairy herd income such as calf sales, but excludes subsidies and grants.

The figures show the percentage of UK dairy herds that are self-sustainable – at actual prices received – has plummeted over the past 12 months.

According to a survey of a cross-section of 325 dairy farm businesses, based on the November 2015 milk price, 12% were farming long-term sustainable herds, which means their output covers full economic costs.

It showed 38% of herds were considered only sustainable in the short term, allowing their output to cover cash cost but not full economic costs.

However, a staggering 50% were categorised as “vulnerable”, meaning their output does not cover cash costs.

In a similar poll carried out by AHDB in 2013-14, only 6% of herds were considered “vulnerable”, 64% had a sustainable long-term future and 30% were sustainable in the short term. In January 2014, dairy farmers were paid on average 33p/litre for their milk.

Mark Topliff, AHDB lead analyst in farm economics, said: “The change in the milk price over the past few months has had a dramatic effect on the ability of farm businesses to cover their costs.

“The milk price has been the biggest difference in how many dairy farms are now considered to be ‘vulnerable’.

“Based on historical information, what can make a difference between making a profit or not is good management practices and cost control. But the change in milk prices is really starting to have a significant effect on those businesses that would be more efficient.”

With prices set to fall a further 1-2p/litre for many dairy producers from 1 March, Mr Topliff said the immediate outlook for the industry did not look positive.

NFU chief dairy adviser Sian Davies said: “These figures are pretty bad. If you take a look at the March milk price, it is a far worse situation now than in November.

“We know the situation is likely to get more difficult with the spring flush. It is going to be a tough three months.”

Amanda Ball, strategy director for AHDB Dairy, said it was very important that struggling dairy farmers talked to their banks and dairy consultants and asked for help where needed.

“Dairy farmers are hankering down and we are not seeing the demand for assistance we would be expecting considering the state that the industry is in,” she said.

“We do need the potential for exit to be a more comfortable conversation. For example, making a decision about your business might not necessarily mean an exit, it might mean a joint venture.”

In mid-March, the NFU and AHDB are due to host an “Influence Day” with representatives from the banking sector, vets, farm consultants meeting under the same roof to discuss the problems facing dairy and ensure that a coherent message is sent out to dairy farmers as well as exploring ways to help them.

AHDB Dairy is also urging dairy farmers across the UK to take part in its Farmer Intentions Survey this year to help build an understanding of the industry.