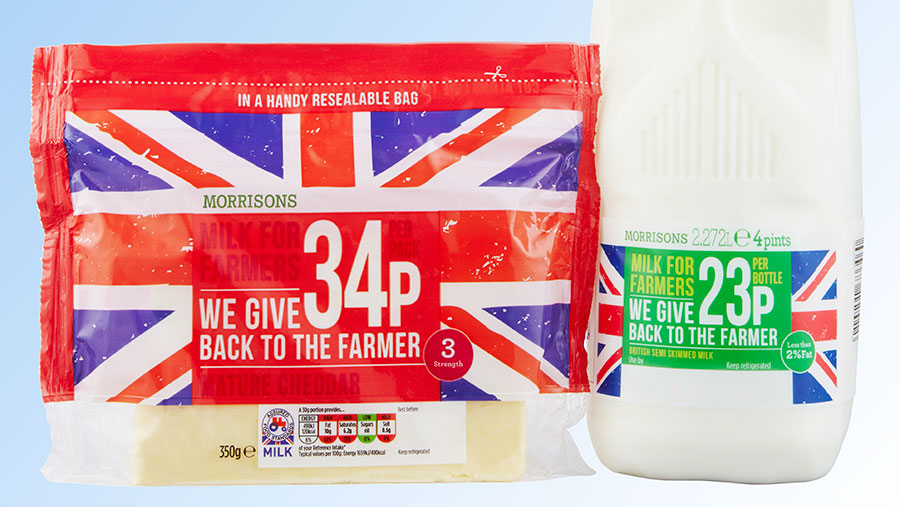 Morrisons is planning to expand its “For Farmers” range even further, believing that shoppers are happy to pay more if the extra cash goes to producers.

The supermarket started selling Cream For Farmers this week, alongside the fresh milk and cheddar which launched last year.

The For Farmers idea has proved so popular that Morrisons is considering more expansions.

It has also registered trademarks for Butter For Farmers, Cheese for Farmers and even Bacon For Farmers, The Grocer magazine first reported.

“We want to expand For Farmers into new product areas and have registered additional brands for possible use in the future.”

Morrisons launched the premium milk and cheese ranges after months of complaints and protests that the supermarket did nothing to support dairy producers.

The Milk For Farmers milk comes in four-pint bottles which are 23p more expensive than ordinary own-brand milk. The premium, equivalent to 10p/litre, is paid to co-op Arla, which passes the bonus on to producers.

Morrisons faced some criticism for using the Union Flag on the packaging, as the money is spread across Arla’s 12,700 European farmers, not just the 2,700 British ones.

The Milk For Farmers cheddar comes in 350g packs of mature and extra mature. The pack carries a 34p premium, which is paid to farmers supplying Lactalis.

The higher-priced milk beat early forecasts and raced ahead of organic within a month of launching. Morrisons sales data revealed it sold five times more For Farmers milk in November.