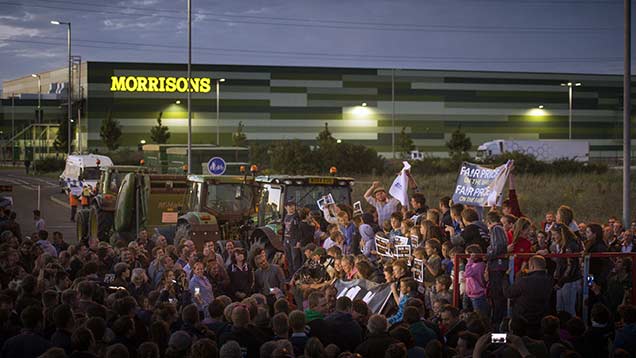 Morrisons has launched a milk brand where 10p/litre of the retail price will go directly to the dairy farmer.

Launching Morrisons Milk for Farmers, the retailer said it would offer consumers the choice to pay extra for four pints of milk, and pass the premium directly on to farmers.

It follows a meeting held today (11 August) by farming industry bodies and the supermarket.

The NFU said it was a “welcome first step”, as did Farmers For Action (FFA), who called for an end to protests while Morrisons presented the minutes of the meeting to its board.

FFA chairman David Handley said it represented a “first small stone that had been turned” – and credited the action brought by young farmers against the supermarket.

But he warned that Morrisons had “maybe days” to deliver money “desperately needed by British dairy farmers”.

The supermarket, which has been at the brunt of demonstrations held by angry dairy farmers in recent weeks, said it would introduce a range of premium-priced milk in the autumn.

It will be branded distinctly and sold alongside Morrison’s standard offering, which today is priced at 89p for four pints (39p/litre).

That extra 10p would be paid directly to farmers, according to the supermarket.

“We want to offer practical help by launching a range of four-pint milk at a retail premium of 10p per litre, all of which will be passed back directly to dairy farmers.”
Morrisons spokesman

A spokesman said it would take some weeks to develop the branding, marketing and find shelf space for the new products, but added the supermarket wanted to launch the brand as soon as possible.

Morrisons’ corporate services director Martyn Jones said he wanted to reassure farmers the price it charged for milk was reflective of the retail market, rather than the price paid to its suppliers.

“We want to offer practical help by launching a range of four-pint milk at a retail premium of 10p/litre, all of which will be passed back directly to dairy farmers.

“We will stock this product in all our stores, offering our customers the choice to support dairy farmers directly.”

What do you think? Will Morrisons decision to offer consumers a premium milk that supports farmers directly make any difference? Let us know in the comments below, or by emailing philip.case@rbi.co.uk