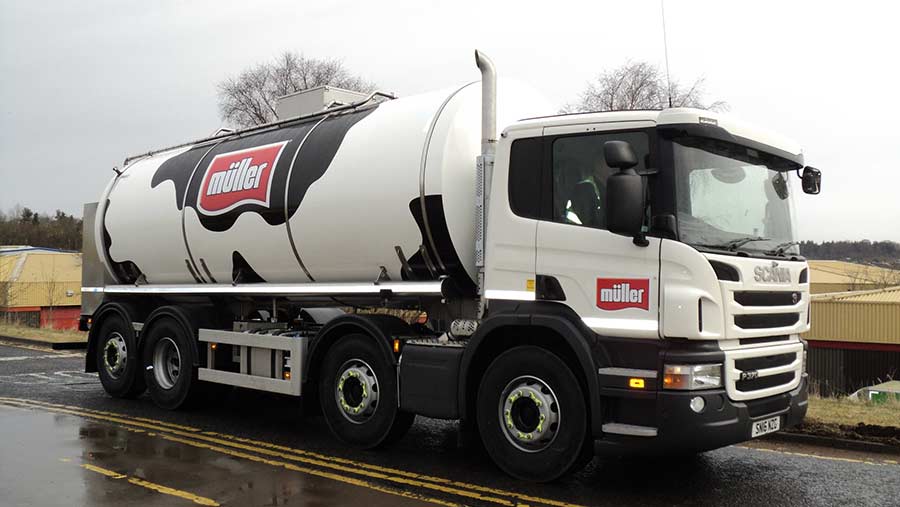 Muller has held its standard litre milk price for August, leaving producers shocked and the buyer adrift of the majority of other liquid milk processors on price.

Producers expressed their surprise at the announcement, with representatives having called for a 2p/litre milk price increase, Farmers Weekly understands.

“Farmgate milk price increases are predicated on strengthening returns but market values for cream and butter have been declining,” he said.

“Despite this, our milk price is holding steady for the month of August which we believe is a sensible and proportionate course of action.

“As one of the very few companies who adhere to the voluntary code, we are providing a full month’s notice of our no-change position. This inevitably means that we will be one of the first to outline our position for August.”

The spokesman added: “We cannot control expectations set elsewhere in the industry, but we are confident that our milk price and contract proposition will continue to be one of the most competitive in Britain.”

The Global Dairy Trade index, an indicator of global dairy markets, did take a big hit in Tuesday’s auction, plummeting 5% to finish at an average price of US$3,232/t (£2,445/t).

However, the hold came as a surprise to the NFU, considering current market trends.

“With milk volumes low following a late spring and a continued period of dry weather we have seen a rise in the value of milk which has been reflected by a flurry of recent milk price increase announcements,” NFU dairy board chairman Michael Oakes said.

Out of line with market

He added: ”This move appears out of line with current market trends as there is an expectation of positive movements in farmgate prices well into September.”

“The move further supports the NFU’s call for better dairy market data. It is paramount that we have a transparent supply chain to allow farmers to see clearly whether their milk price is reflective of what is happening in the UK market in terms of pricing and volume.

“As this dry weather continues to impact on crop yields, the NFU are urging milk buyers to be mindful of the impact a sustained period of dry weather will have on their suppliers and work collaboratively with them to manage yield and quality challenges as they arise and offer a sustainable milk price going forwards,” he said.

AHDB Dairy data indicated that taking into account the three-month lag between dairy commodity markets and their translation to farmgate prices, GB producers should expect the average farmgate liquid price to increase by 0.9p/litre in August.

Many Muller producers contacted Farmers Weekly anonymously to express their anguish at the hold.

One producer said: “I fully expected a milk price of at least 30p for August so I was in utter disbelief there was no increase at all.

“And it’s not just me. All Muller producers are in shock.

“Unless the weather changes we are going to be really short of fodder right across the UK and at 28p we are simply not getting paid enough.

“Muller are doing this because they can, it’s as simple as that, and as producers we have no real leverage.”

Another Muller dairy farmer was distraught that he would not be able to pay his bills this month.

“I can’t understand Muller’s pricing – we need years of prices above 30p/litre to recoup from the last downturn,” he said.

The producer commented that it was no surprise there was no one under 50 coming through in the industry in his region.

“It’s alarming how many farmers have left dairying and nobody’s sons want to come through. It’s hardly surprising when we aren’t paid anything like a fair price.”

A third producer said this was a very tangible example of why processors having discretion on price in the UK was not working, adding that the current system allowed producers to pay what they wanted regardless of the position of the market or competitors.

“It’s ridiculous farmers have to speak anonymously and not to be seen to be critical of a company they supply, even when it’s completely justified, out of fear of contractual repercussions,” the producer added.

Independent market analyst Chris Walkland had predicted in Farmers Weekly last month (20 June) that surpassing the 28p/litre mark would be a challenge for some processors.

“I think the retailers have it in their minds from the downturn that 28p is a fair milk price, because back then they were told 28p should be ‘the fair milk price’ and they agreed,” he said.

Dairy wholesale markets are in an unusual place at the moment, according to AHDB dairy analysts.

June saw commodity prices increase as milk production hit its seasonal peak, whereas, despite prolonged dry weather leading to a tightening of stocks across the month, prices eased on the back of thin trade.

UK wholesale butter average prices edged down by 1% to £5,130/t in June as buyers appeared to wait for prices to fall during the month, the levy board said.

Skim milk powder (SMP) lost its momentum as the month progressed following a partial revival in prices in May, but averaged 3% up at £1,360/t.

Mild cheddar was the only commodity which maintained some semblance of stability throughout June, with tight stocks nudging prices up 1% to £3,000/t, 8% below the same level 12 months earlier.

Despite the confused performance of butter and cream, the dairy market indicators actual milk price equivalent (Ampe) and milk for cheese value equivalent (Mcve) both increased in June.

Ampe, driven by changes to butter and SMP prices, crept up 0.4% to 33.23p/litre while Mcve, an indicator of cheese returns to processors before transport, performed slightly better, up 1.4% to 32.77p/litre.