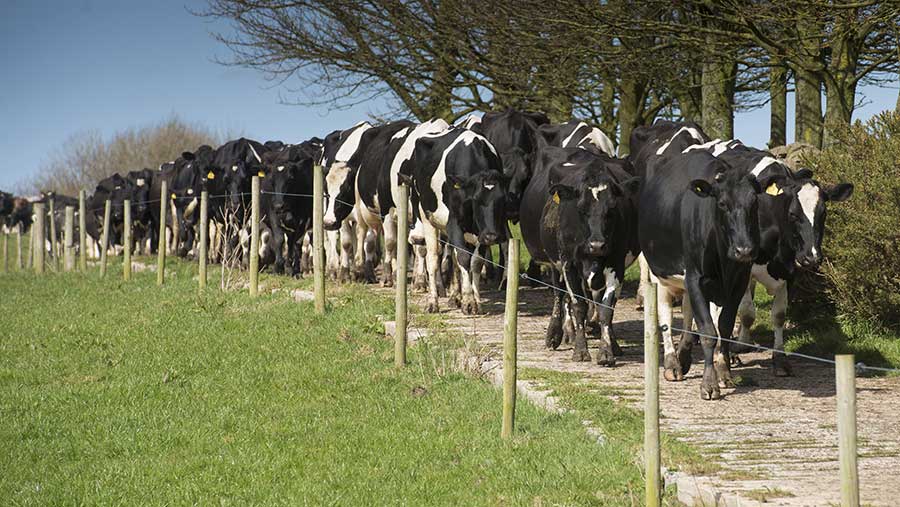 Strengthening dairy markets mean producer milk prices could hit the 30p/litre milestone in the next three months, as wholesale butter and cream prices continue to soar.

Most UK dairy farmers will get at least 28p/litre in July, the highest price for the month since 2014, driven by restrained supply off the back of prolonged wet weather, rendering the spring flush almost non-existent across much of Europe.

Where is the price heading?

Prices for August and September should increase by up to 2p/litre across the two months for those on liquid milk contracts and more for those producing cheese, according to dairy market analyst Chris Walkland, as long as markets maintain current momentum.

“The outlook is very good for the next few months – a finely balanced very good, mind,” says Mr Walkland.

However, he adds that producers should remain cautious should the price exceed the 30p/litre mark.

“If it does [go beyond 30p], don’t go mad and up your volume because before you know it, your price will be down at 26p/litre again.

“What you want is a long-term stable, high price, not the maximum price,” says Mr Walkland.

Further milk price increases would mean breaking through the 28p/litre barrier, which Mr Walkland says has become a glass ceiling for retailers.

“I think the retailers have it in their minds from the downturn that 28p is a fair milk price, because back then they were told that 28p should be “the fair milk price,” and they agreed,” he says.

“That doesn’t mean the processors won’t pay more than that, because they are still getting a good income from cream. If a producer is not making money at current prices, then they need to be in something other than milk,” says Mr Walkland.

Kite Consulting’s John Allen is currently running the R500 benchmarking programme for 400 Arla producers. The process can save money and improve wellbeing, he says.

Wholesale markets have been buoyant in recent weeks, with UK wholesale cream and butter prices averaging 13% and 11% increases in May to £2,350/t and £5,180t, respectively – both one-fifth higher value than year-earlier levels.

Rising butter prices have driven increases in the Actual Milk Price Equivalent (Ampe) dairy market indicator, which stood at 33.1p/litre for May, its highest level since September 2017.

Milk for cheese value equivalent (MCVE), an indicator of cheese values to a processor before transport costs, hit 32.3p/litre, its highest level for six months, due to strengthening values of mild cheddar and whey butter.

Mr Walkland says if there is anyone not making money at these prices now, then they need to do something else.

Is now the time to spend?

Dairy consultants are urging farmers to take a longer-term view of prospective milk prices before getting the cheque book out – farmgate prices have only exceeded 30p/litre in five of the past 36 months.

The key for producers is to have a clear idea of their financial position before spending, says Farm Consultancy Group dairy business consultant Andy Dodd.

“It’s crucial to take a 12-month view of where cashflows are likely to be, rather than spending when the milk price is up,” says Mr Dodd.

“Now is the time to examine variable costs such as feed, breeding and vet’s bills. Producers should be reviewing these costs twice a year and working with professionals to ensure they are getting the best price and best quality for their money.”

Now is also the ideal time to make sure stock numbers are optimised to fit individual systems, and excess heifers should be put into beef to improve cashflow.

Is now the time to switch buyer?

“We are living in a volatile world, so it is important producers seek long-term stability where they can.

“More and more milk buyers are looking to recruit, so it is crucial farmers do their research and check if moving contracts would fit their current system.”

Mr Dodd recommends not just examining the headline price for this month, but to look at a processor’s long-term milk price as well as how they deal with other producers.

“Speak not just to one or two other suppliers, but six or seven, asking questions about how the processor communicates or deals with things like bonuses before making a final decision.”