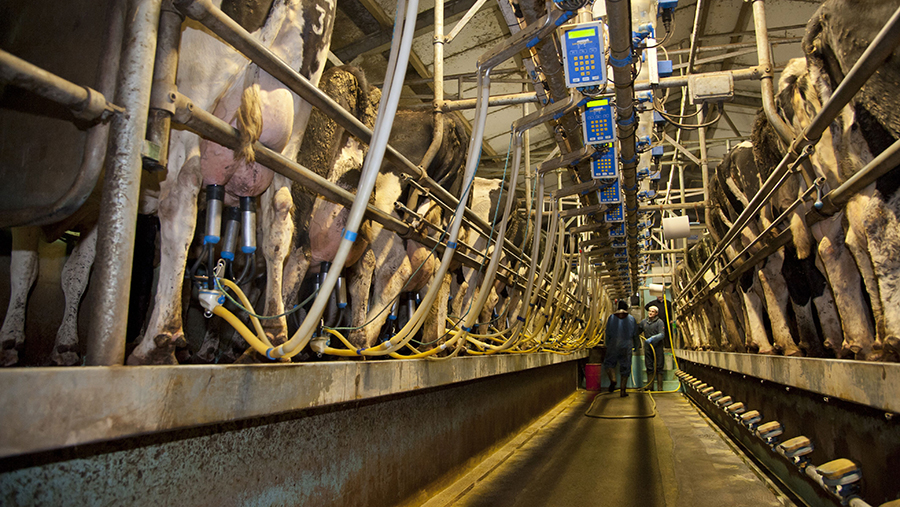 The wide range in dairy farmers’ costs of production has been highlighted by figures released by Defra.

Analysis of the results of the 2015-16 Farm Business Survey show the average cost of production was 25.5ppl, against an average farmgate price of 25.3p/litre for the farms involved in the survey.

However, they also reveal that 5% of businesses were producing milk for less than 20p/litre, while another 13% were averaging between 20 and 22.5p/litre.

See also: Industry split over value of ‘A’ and ‘B’ milk contracts

In contrast, 20% of farms were producing milk at over 30p/litre.

The costs have been calculated on a full cost of production basis.

This means they include all financial aspects of dairy enterprises such as any unpaid labour (including that of the farmer and any spouse), herd depreciation and an estimated rental equivalent for land that is owned.

An allowance is also made for non-milk revenue, most of which is from the sale of dairy calves, which is applied as a reduction to cost.

As a result, the production costs represent the price that would have to be paid on all milk produced for dairy enterprises to break even.

The figures are broadly in line with typical milk production costs published by AHDB last month, for the 12 months ending September 2016, which ranged by 6p/litre.

These figures, which are updated every three months, showed the full economic costs of production was 26p/litre for the top 25% of herds, when ranked by net margin, and 32p/litre for the bottom 25%.

Rachel Lawrence of the FBS said dairy farms across the country had showed great resilience as they adapted to crashing milk prices.

Faced with an 18% fall in the farmgate milk price, farmers managed to not only increase milk yields by 5% to average 8,200 litres per cow, but also cut back on costs.

The most significant drop was seen in feed bills where farms cut spending by an average of 11%. Producers also made big savings on machinery and fuel costs.

But Ms Lawrence added: “There’s still a huge amount of variability in the sector.

“Twenty-two per cent of dairy farms lost money in 2016, up from 9% the previous year.

“However, 16% of businesses had a farm business income of over £100,000. These latest results from the FBS show the results of a tough year, but also the ability of farms to respond to change and adapt to the future.”