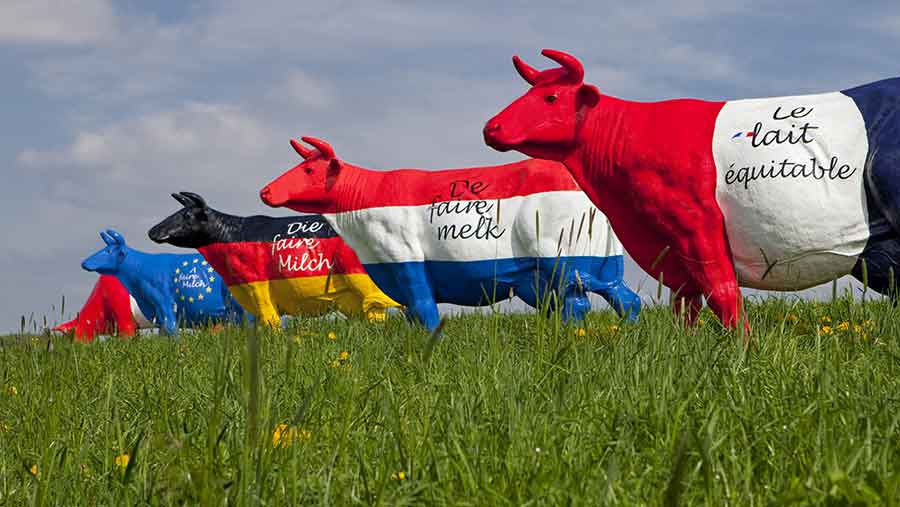 Final details have been confirmed for the EU’s milk production reduction scheme after a member state expert meeting in Brussels at the end of last week.

There are some crucial changes to the schedule, the most important being an alteration to the first deadline for applications, now 21 September – two days earlier than originally laid out.

The meeting also scheduled the deadlines for all four tranches of the scheme, which could last until March, depending upon the scheme’s uptake.

See also: Checklist: How dairy farmers can get ready for EU milk scheme

“All of our research is suggesting that the first tranche will be very popular, if not oversubscribed,” said David Keiley, consultant at Scotland’s Rural College.

“This means the £30m UK allocation may not stretch past the first intake, so those interested should not rely upon subsequent tranches.”

Mr Keiley added that with the dairy market currently looking to end the year strongly and UK production already lower than the rest of the continent, producers must ask themselves if it was worth taking up the scheme.

“If farmers were active in July and are looking to leave dairy then it’s a good idea for them to earn 12p/litre for not producing; it may encourage them to leave sooner.

“But for others it’s worth considering the value of the scheme and looking at continuing to produce as milk prices continue to rise.”

However, forecasting where an individual’s milk production would be without the scheme should be why farmers decide whether or not apply, said Ian Powell, managing director of The Dairy Group.

“If a farmer’s production was going to drop anyway, TB may have taken cows or if calving has slipped, it makes sense to go for the scheme.

“But the question must be, what will you do after the three-month period ends?

“It’s a short-term change to production at a time when some processors are increasing prices again, and those capable of increasing production should be cautious of cutting back.”

Under the scheme, farmers will be entitled to 12p for every litre produced less than the same period the year before, up to a maximum reduction of 50%.

Full payment under the scheme will be made within 90 days of the end of each tranche.