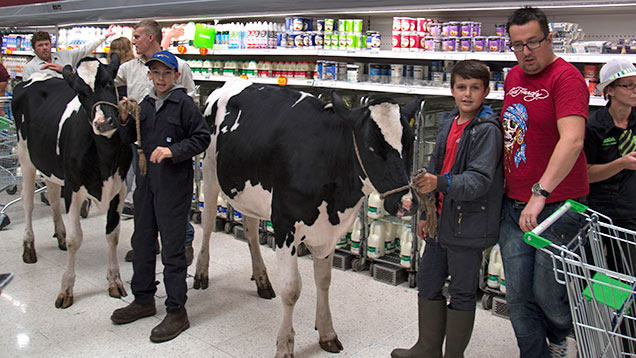 Dairy farmers have taken two heifers into Asda in their bid to inform shoppers about the effect low milk prices are having on the industry.

The heifers from Aston Pool Farm, near Stone, arrived at the Queensway store at 12.15pm on Sunday (9 August), where they joined by a group of 70 farmers for the protest.

A young handler, known only as “Daniel”, who led one of the animals through the store, told the public: “Our cows couldn’t believe how cheap the milk was, so we took them here to show them.”

The protest was organised by Staffordshire and Derbyshire United Farmers for Real Action.

Matthew Weaver, a spokesman for the group, told shoppers that if supermarket milk prices stayed at their current level of 89p for four pints, there would be no fresh milk in six to 12 months’ time as farmers cannot afford to sell milk at this price.

“This milk should not be cheaper than bottled water and that’s the point we’re trying to make today,” he added.

Some farmers cleared the shelves of milk while others spoke to members of the public and handed out leaflets.

Staffordshire Police were called to escort the heifers out of the store. A spokesman for the force said: “The protest remained peaceful and minimal disruption was caused to the general public.

“Further short, peaceful protests were carried out at Lidl in Stafford and Asda in Wolstanton but were concluded by 2.45pm.”

An Asda spokesman said: “Our milk is supplied by the Arla farmer co-operative. The Arla dairy co-operative is owned by farmers.

“We moved to this model after guidance from those supplying us and it means the price received by our farmers is set by their own co-operative business.

“They receive an on-account payment for their milk and take an equal share of any remaining profit. There is no link between retail prices and farmgate price.”