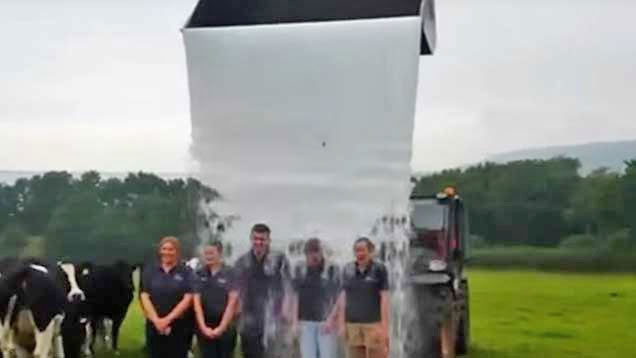 Protesting dairy farmers have taken to drenching themselves with milk in a bid to promote awareness of the price crisis and to raise funds for a farming charity.

In 2014 millions of people nominated friends and colleagues to dump freezing water over each other to raise money for a motor neurone charity.

Not wanting to pour cold water (pun intended) on efforts to raise money for hard-pressed farmers, but it has to be pointed out that using heavy machinery for these challenges is dangerous.

A farmer in Germany died after the loader bucket he used in an ice bucket challenge fell on him last year.

This year’s milk version pushes the message through Facebook, Youtube and Twitter that the price of milk is so low that it is as cheap as water.

Those taking part in the challenge have been using the Twitter hashtag #FCNmilkbucketchallenge.

After the soaking donations are made to the Farm Community Network (FCN) charity which supports farming families and business in times of difficulty.

The challenge began among Devon young farmers clubs and is spreading quickly.

In one video members of the Vale Farm Vets practice are swamped with gallons of milk, dropped from a loader.

In a separate video a father is seen taking a bath in milk.

His young daughter asks why he is using milk to wash his hair and he responds: “Because it’s cheaper than water.”

To get involved with the challenge film your milk-related drenching, upload the video to your chosen social media site with the hashtag #FCNmilkbucketchallenge and then donate between £1 and £10 to FCN by texting to FCNM22£amount to 70070. For a £1 donation the code to text would be FCNM22£1.