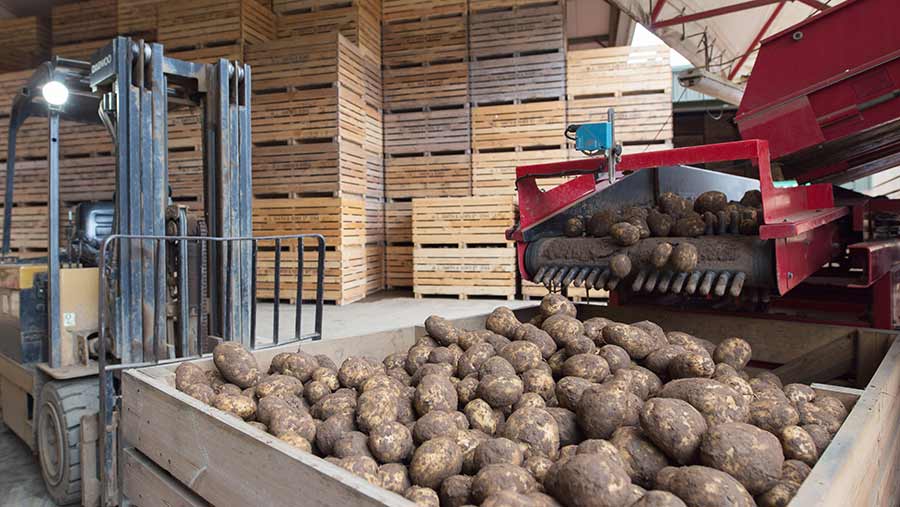 Northern Europe continues to be a threat to an already over-supplied UK market.

While the weak pound reduces the competitiveness of European production, the cost of production in mainland Europe is lower than here in the UK, due to better yields/crop utilisation and a generally lower cost base, says Andersons director Jay Wootton.

In late September, dig results from the North-western European Potato Growers group suggested an increase in North European production of 14% compared to last year. Quality is understood to be reasonable.

The UK market for processed product continues to grow and the lack of investment in processing facilities generally is a concern, if growers are to take advantage of that market, says Mr Wootton.

“Continental processors are well placed to take advantage of the opportunities provided, and displace home-grown tonnage.

“Ware growers reviewing their strategy would do well to consider the option of processing contracts. However, the relative economics between ware and processing, and the productive capacity of their land base, will be dictating factors.”

The investigation of whole-crop processing is an interesting, though not a simple, proposition, he says.

“Using more of the crop should be an objective throughout the supply chain. At farm level, the fraction of the crop graded out can vary significantly, usually due to mechanisation and the resulting ability to size grade accurately, and the quality of grading labour.”

A number of technical improvements can be made, such as grading and paying more attention to harvester set up and tuber handling. Also, the sector needs to do all it can to retain access to Eastern European labour, which remains crucial for productivity, he adds.

“But the biggest efficiency gains come from selecting the right land in the first place. That gives you the best chance of growing the right potatoes and being able to harvest them well, ensuring as much of the crop as possible can be used.”

Potato growers may have lifted a heavy crop but prices in the open market are depressed, a wet summer could herald disease problems in the spud store, while there are concerns about blight-resistant strains.

A cold late spring played havoc with tuber numbers and tuber size, and growers often struggled to meet the strict size demands of the supermarket packers, so most will be hoping for a kinder season in 2018 and better prices.