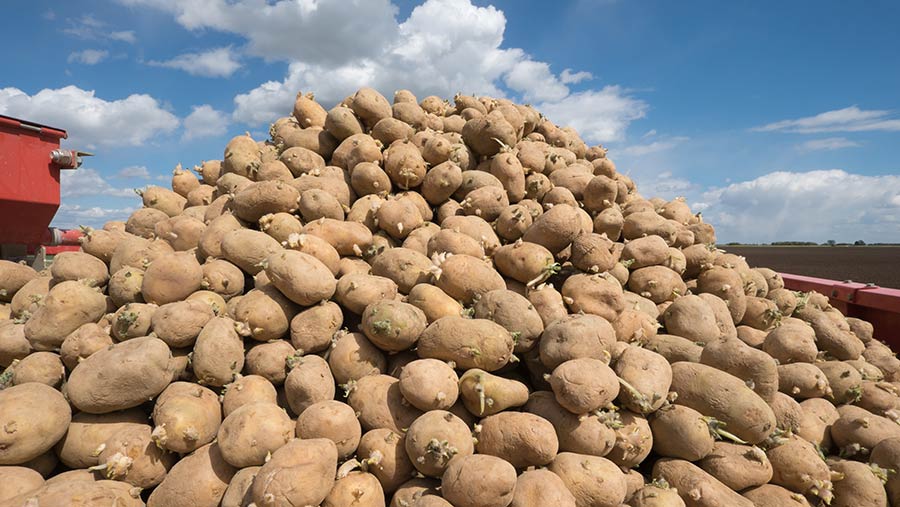 Potato stocks on British farms have fallen by 26% year-on-year to less than 1m tonnes as the effect of the poor growing season continues to play out.

The 2018 crop fell below 5m tonnes for only the fourth year since 1960 as freezing weather dogged planting and the following drought limited growth.

However, careful management and a relaxation of specifications have limited some of the impact from this season’s low production, according to AHDB analyst Aidan Wright.

The end of March estimate suggests that an additional 860,000 tonnes of crop was released from grower ownership.

This comes in at 13% below the five-season average and is the lowest drawdown since 2012-13.

One of the reasons for this in the packing sector was a significant carryover from the 2017-2018 crop whereby buyers could source old crop as much as a month into the season, Mr Wright said.

For processing stocks, drawdown has returned closer to normal following increased movement earlier in the year.

That was due to growers moving at-risk stocks held in ambient stores in the warm weather in February, Mr Wright explained.

A further factor has been the availability of good quality packing stocks in Scotland this season, which held an estimated 34% of total stocks at the end of March.

Scottish supplies have been making their way into the English market and for export to countries which had a similar growing season to the UK’s, Mr Wright added.

Availability of the early crop would be key as we approached the new season, Mr Wright said.

So far the season has progressed well with planting conditions appearing to have been good across most of the UK. However, the size of the area planted is more difficult to predict than usual.

“Normally, after a year of high prices, we see an increase in planting area the following year,” Mr Wright said.

“But three factors may cause growers to buck this trend in 2019.

“The difficulties of last season will undoubtedly put off some growers. This, combined with both relatively high seed prices and concerns around water availability, may see a break from planted area trends.”