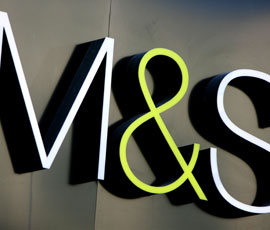 A unique new milk pricing formula being rolled out by Marks and Spencer is earning dedicated dairy farmers up to 29.45p/litre, provided they meet the highest standards of animal health and welfare.

In response to the continuing squeeze on dairy farmers’ incomes and growing consumer demand for the highest welfare standards, the supermarket has revealed that their new Milk Pledge Plus pricing model will take into account not just the cost of production but also the retail milk price – a first for supermarket-producer milk contracts.

The model will focus on fuel, fertiliser and animal feed costs and will be run every month with a six-monthly price review for the company’s 44 dedicated UK producers. The company has also introduced two additional payments for producers who meet their highest farm and animal welfare standards which can be worth as much as 2p a litre for farmers who pass the assessments.

The “Health and Welfare Programme” indicators include the incidence of lameness, mastitis, the length of time cows spend lying down and longevity and the “Farm Standards Programme” relates to the quality of buildings and the “cow comfort experience”.

The company’s agriculture manager, Steven McLean, who revealed the new scheme ahead of its official launch at next week’s Royal Highland Show, said the company was very clear on the future challenges from non-governmental organisations and consumers and had to prove their product was at the top of the spectrum in terms of environmental and welfare standards.

He added: “We have worked with Compassion in World Farming and industry leaders such as Dr Nick Bell of Bristol Vet School, SAC and dairy consultants Andersons Midlands to devise assessments and standards. Already two-thirds of our 44 units are hitting the highest targets and the other third is in the process of implementing action plans.”

But while the prices appear attractive, there seems little scope for other farmers to benefit from the scheme as Mr McLean said it was the company’s policy to allow existing producers to expand their businesses to meet growth in demand.

He added: “We’ve worked with the same producers for the last 10 years and when we ask them what attracts them to the transparent payment model they tell us it enables them to go to their banks with a contract which allows them to invest. I think we’ve found the answer to milk pricing and we’re proud to set an example for the rest of the industry.”