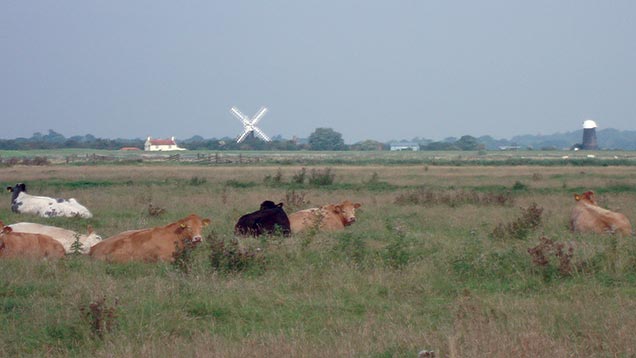 Farmers will travel from as far as Essex, Kent and Lincolnshire to bid for a seasonal grazing licence on one of 63 lots of Norfolk marshland later this month.

About 900 acres is available, enclosed by Haddiscoe New Cut and Waveney and Yare Rivers near Great Yarmouth, with parcels ranging from five to 52 acres.

The clay soils, grass, watercourses and livestock are looked after by experienced marshmen, who are paid £21/acre by successful bidders. Their employment is compulsory on nearly all of the plots and they manage the land under Entry Level Stewardship and Higher Level Stewardship agreements.

Rachael Hipperson, the director of agent TW Gaze, said: “Last year’s prices averaged £108/acre, which is up significantly on previous years, but it is an auction and the range will be significant,” said Ms Hipperson.

“This year I can’t see anything making less than £60/acre and last year the top price paid was about £130/acre. You can’t always say why one plot commands a lot more than another.”

The land is largely owned by the Askew Marshes Partnership and is known for producing quality forage, having good access and communal livestock handling facilities.

Many farmers had retained the same plot for more than a decade, said Ms Hipperson.

“Ten years ago it was mostly local people who attended the auction to bid, but now we’ve got people from more than 50 miles away,” she said. “The pub will be absolutely rammed. The attendance must be around 100.

“I think it’s so popular because the marshmen are there and so the farmers who secure a plot can effectively delegate some of their stockwork responsibility over the summer to free them up for silage or other things.

Despite being below the river level, there have been only been two occasions in the last five years where the river came over its banks – both occurring outside the grazing season, which runs from 1 April until 31 October.

The plots will go under the hammer on Monday 30 March at The Bell Inn, St Olaves, at 1pm.