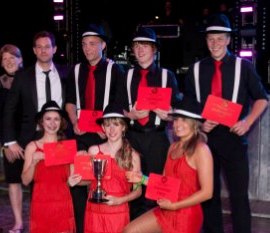 Strictly Come Dancing star Matt Baker made a special guest appearance as a judge at the Jazz Dance finals at the Young Farmers AGM on Saturday (May 7).

One-time Blue Peter front-man Matt, who also presents Countryfile, attended the contest ahead of being appointed president of the National Federation of YFCs.

Matt, who grew up on his family’s sheep farm near Durham, has long had connections with the YFC movement – he’s helped with judging, competitions and events, and his mum, Janice, is Durham’s county organiser.

The final saw eight teams go head-to-head in front of the celebrity judge plus a large crowd of supporters in The Empress Ballroom in Blackpool.

The six-strong mixed team from the Derbyshire club of Bakewell took the honours, with Isabel Probert from Herefordshire coming second.

“It was amazing having Matt Baker as a judge,” said Anne-Marie Harris, who was part of the Withleigh team from Devon which came third.

“It gave us a great buzz and he wolf-whistled during our routine! The crowd were great, too – they really egged us on.”

Dance fans will remember him from the 2010 series of Strictly, in which he took the runner-up spot along with his Russian dance partner Aliona Vilani.

The pair fitted in training around his commitments as a presenter of Sunday night’s Countryfile, which can draw 6m viewers. According to media reports, they even occasionally found themselves practising on farms as a result.

“We’ve had to practise in the barns and in the fields next to the tractors,” Aliona told the press at the time.

He’ll succeed the hugely popular Lionel Hill as president of the NFYFC. Lionel said that Matt’s high profile would spread awareness of the YFC movement and potentially attract a whole new generation of members.

* See more pictures, video and stories from the young farmers AGM on our special page.