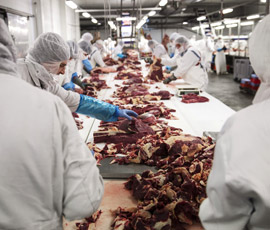 Meat processors are being squeezed between improved farmgate prices and static retail prices, putting many under financial stress.

Record producer prices for some livestock sectors during 2013 have been good news for producers but static retail prices have seen processors’ margins become increasingly tight.

New research suggests almost a quarter of the UK’s biggest meat companies – 216 of the 1,000 largest – need an urgent survival plan, either from an injection of capital, a radical cost reduction scheme or financial restructuring, according to analyst Plimsoll.

Less than half the companies, 477, were rated as strong.

“It is clear from this study the meat market is going through a period of great change and the market is highly competitive. These 216 companies rated as danger are clearly operating under financial pressure and many risk being forced out of the market,” said David Pattison, Plimsoll’s senior analyst.

“If failures are predictable, and if enough warning can be given, the management has time to get a survival plan in place to save the company.”

Larger abattoirs held big retail contracts and could absorb some of the squeeze in margins, while smaller abattoirs usually catered for independent butchers and niche markets and had more control over prices, he said.

“The wholesale market has extra distribution costs,” he said, and it was often cashflow problems which caused these businesses to collapse.

“Also there has been no let-up in price inflation meaning the amount of money at risk builds up quickly,” he added.

According to KPMG, this was the reason behind one meat business going into administration last week.

“After suffering cashflow problems due to the loss of a significant contract and investment in an acquisition that failed to deliver the anticipated benefits, this long established family business was unable to continue trading and a solvent sale was not possible due to the levels of debt in the business,” said Will Wright, joint administrator and restructuring partner at KPMG.

The business was sold on a pre-pack deal, meaning that a sale had been lined up before the company entered administration and that work will continue at the plant under new ownership.

However the position for farmer creditors was not clear until prospects for the business had been assessed, said the administrators.

Meanwhile, the consultation period with staff and trade unions on the proposed closure of butchery and slaughtering facilities at Karro Food Group’s Wiveliscombe, Somerset, plant has been extended to Monday (16 September).

Protect your interests
When businesses get into trouble, as unsecured creditors farmers were often among the last to be paid, said Mr Mowbray.

“If you get 10 pence in the pound you’ve done quite well,” he said. “But sometimes they do pay everyone out.”

Mr Mowbray advised farmers in this position to talk to their debtors. “Don’t be fobbed off with the first answer,” he said, urging them not to necessarily “cut and run”. Financial problems in processors could be short term – particularly if market conditions change.

“Selling through a group could also protect farmers,” he said. Farmer co-ops and selling groups often have trade indemnity insurance, which protects farmers for up to 90% of the total owed. The group might sometimes top this up to 100% with member contributions.