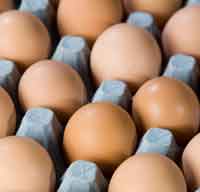 There is too much emphasis on egg size and the UK industry should be educating consumers to prefer medium eggs.

That is the opinion of Monmouth egg producer and the chairman of the British Free Range Egg Producer’s Association, Tom Vesey.

Speaking to Poultry World, he highlighted the Continental system, where producers use breeds which lay smaller eggs than those in the UK.

“Whenever I go to the Continent, people eat medium-sized eggs. Yet the consumer here seems to be wedded to larger eggs, believing they are better value. Therefore, we as producers are encouraged by packers to produce as big an egg as possible.”

But there were many benefits to consumers and producers in opting for Continental-sized eggs, he said.

Mr Vesey, who keeps 16,000 hens at his farm in Dingestow, Monmouth, said one benefit was that the smaller-egg breeds used widely in Europe laid for longer.

In the UK, most hens were depleted at 72 weeks, but these breeds often continued laying until 80-90 weeks, which was a great economic advantage.

“If the price of medium eggs went up, then these breeds may become more popular.”

Another benefit of medium eggs was quality. “I prefer medium eggs. They are less watery, don’t run off the plate, and the shell quality is better.”

As the hen got older, egg size increased and the egg white tended to become more watery; it was a natural process, he added.

There was also a welfare benefit of managing flocks for smaller eggs, as eggs larger than the breed standard could cause bird health problems, particularly in flocks where egg size was out of control. Stress was a huge problem, particularly at the end of lay and large eggs could be a contributory factor.

But Mr Vesey stressed that this was not the main factor behind his message and that the recent media articles had misrepresented his views by overplaying the welfare card.

Producing smaller eggs did not have to mean changing breeds. With existing breeds it was possible to control egg size through the hen’s diet, by adjusting amino acid levels, he said.

But there was no economic incentive for UK producers to produce smaller eggs, as there was a significant price difference between large and medium sizes.

According to the latest DEFRA figures, the packer-to-producer price for very large free-range eggs (October to December 2008) was 98.9p/doz, whereas it was 83.8p for mediums.

“To move forward, we will need to get this egg quality message across. We have got to change the feeding habits of a nation,” he added.

The idea had got to be marketed to the consumer, the price between the egg sizes needed altering and only then would the producer alter feeding and breeding habits, said Mr Vesey. But he stressed that the only really important thing was for the consumer to keep eating eggs.

Should we be educating consumers to eat smaller eggs?

Have your say and visit our forums.