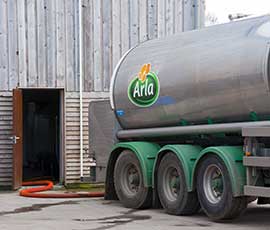 Arla producers have just one week left to decide whether to sign up to full co-operative membership.

For those in the Tesco Sustainable Dairy Group (TSDG), the decision between becoming a member of the Arla Foods amba co-operative or staying with the TSDG hinges on five key factors, according to Kite Consulting.

These are attitude to volatility, volume bonuses, the co-operative principles of each farmer, views about the longevity of retail schemes and the effect on the balance sheet over time.

Kite’s analysis shows the core milk price between the Tesco and Arla amba price (including the 13th payment profit-related bonus) showed a difference of just 1.4% on average between January 2008 and September 2013, but Arla farmers saw greater price volatility.

Larger volume bonuses are available from Arla to bigger producers – the maximum Tesco volume bonus is 0.6p/litre, but the maximum for Arla is 1.9p/litre, weighting the financial advantage for large producers, especially for those on liquid contracts, towards joining the pan-European co-operative, said Kite.

The effect on the balance sheet is also important – the investment had to be weighed against the cash benefit of remaining on the Tesco contract. “These issues highlight the importance of looking closely at the business case on an individual basis before making a decision,” said Kite consultant Chris Flint, who produced the analysis for dairy farmer clients.

At The Dairy Group, Nick Holt-Martyn said the offer of co-op membership gave some security for the future to non-aligned producers, but for those who had had the benefits of the Tesco supply group, the opportunity was much more mixed.

“If the quantifiable differences in milk price are minimal, the real difference is whether you feel more comfortable owning and supplying a global dairy co-op or being aligned with Britain’s largest retailer,” he said.

“The Tesco formula price will mean milk prices will move as production costs change, so both will tend to reflect the wider dairy economy, although Arla will reflect an EU (or Danish) position rather than the UK. Suppliers will need to consider which is more likely to have the lower volatility when quotas are abolished and which is more likely to achieve the better milk price in the longer term.”

Arla co-op membership: what to consider before signing