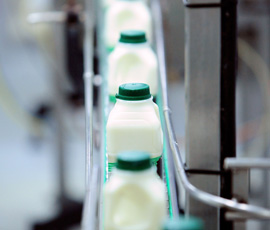 The NFU has demanded milk buyers work with, rather than against dairy farmers, who face spiralling production costs.

NFU dairy board Chairman Mansel Raymond commented on rumours of milk price cuts to farmers in the liquid sector, at a time when global and domestic dairy commodity markets are rising.

“If rumours of a wave of cuts in the liquid sector are to be believed, farmers will reasonably be asking some serious questions about the process by which some milk buyers make pricing decisions,” said Mr Raymond.

Farm gate costs of production are currently over 30p/l and rising, he said.

“Based on feed, fuel and fertiliser cost, we estimate that the average farm costs of production have risen by 0.3p/l in the past three months.

But the NFU said that there was another way forward – for milk buyer and producer to work together and understand each other’s needs.

The union said that the farmer’s need to make a reasonable living and invest in the future of their business was paramount.

“For too long dairy processors have played fast and loose with farmers’ livelihoods, collectively failing to think long term. Dairy farmers need a sustainable future. Further price cuts will jeopardise this and be met with real anger,” Mr Raymond added.