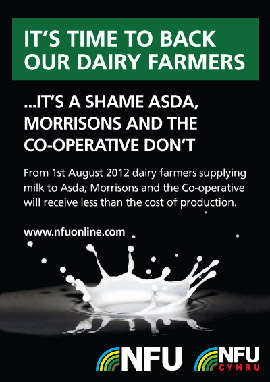 A name-and-shame campaign targeting supermarkets that sell milk supplied by farmers paid less than the cost of production is spreading across the internet.

The “Back Our Dairy Farmers” poster produced by the NFU has been shared more than 3,000 times across social media networks Facebook and Twitter.

“It’s time to back our dairy farmers,” the poster says. “It’s a shame that Asda, Morrisons and the Co-operative don’t.”

From 1 August 2012, dairy farmers supplying milk to Asda, Morrisons and the Co-operative will receive less than the cost of production, the poster adds.

The NFU is urging its supporters to download the poster.

It came as the union said it would support peaceful demonstrations outside dairy processors and retailers unless recent milk price cuts to farmers are reversed.

An Asda spokeswoman said the supermarket chain was continuing to have discussions with the farmers who supply its milk.

“We’re extremely proud of the relationship we have built up over the last six years, which is a result of having an open dialogue with them and Arla.

“We pay a premium above and beyond the Arla base price – and that premium benefits each one of the 300 dedicated farmers who supply Asda with milk.

“We will continue to meet with our farmers and their representatives over the coming days and weeks as we seek to resolve the current difficulties they face.”

A spokesman for Co-operative Food said the retailer was doing everything it could to attempt to alleviate the pressures facing dairy farmers.

The Co-operative had already taken the decision to increase the premium it paid on milk to farmers by 0.65p per litre taking it to 2p/litre.

The retailer argues that its “market price plus premium mechanism” provides a secure, long-term partnership with farmers and delivers benefits beyond simply what it pays for milk.

“We continue to argue that looking purely at price as a means of gauging our support for farmers is misleading,” said the Co-operative.

“We have a series of measures in place, unique to the Co-operative, which is playing an important role in helping farmers to reduce the cost of production.

“These include a series of professionally facilitated workshops on farm management, a carbon and energy efficiency audit, access to cut-price power and a contribution towards veterinary care.”

The NFU accepts that the Co-operative has upped its premium above the market price but says that it is still below the cost of production.

Morrisons has also been asked to comment on its milk pricing policy but is yet to respond.

Tesco, Sainsbury’s, Waitrose and M&S are not being targeted by the NFU because they operate pricing mechanisms based on the cost of production (COP), rather than the market price.

But some farmers have warned that COP models can be misleading.

This is because some retailers buy milk cheaply from processors as well as purchasing milk at a higher COP-based price direct from farmers.

Major processors have slashed some 4p/litre of the farmgate milk price since 1 April.

Price cuts by Robert Wiseman Daires, Dairy Crest, Arla and Milk Link have left many farmers who were barely breaking even deeper facing an annual loss of at least £50,000.

Farmers not on COP pricing models are frequently receiving less than 25p for milk that costs them 30p/litre to produce.

NFU deputy president Meurig Raymond said milk producers would be forced to take action unless the price cuts were rescinded by 1 August.

“If this doesn’t happen, then we will support and facilitate targeted demonstrations outside processors and retailers,” he said.

“We will also mobilise the public with a concerted consumer campaign to help them understand the crisis facing the dairy industry and we will be asking them for their support with this campaign.

“All this co-ordinated action will be designed to put pressure and bring shame on the retailers and processors who have caused this crisis in the British dairy industry.”

More than 2,500 dairy farmers travelled from across Britain to discuss the issue at an emergency milk summit, held at Central Hall, Westminster, on Wednesday (11 July).

The government has repeatedly refused to bring in legislation that farm leaders believe would ensure a fairer deal for milk producers.

Instead, farm minister Jim Paice believes a voluntary code of practice governing milk contracts would be a better way forward.

Mr Raymond said the NFU remained hopeful that a voluntary code would bring some balance to the relationship between farmers and processors.

But he warned: “Before long we have to ramp up our lobbying of Parliament to introduce statutory powers.”