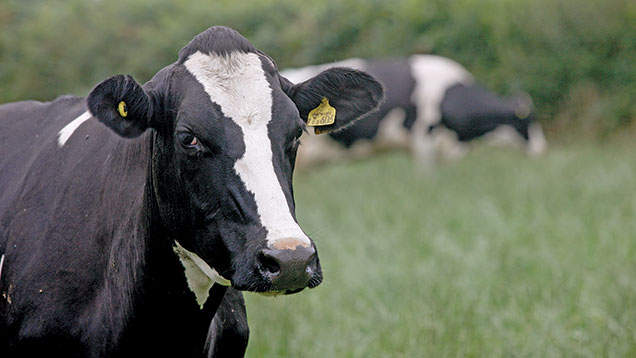 Now thousands of British dairy farmers are being paid 8-10p/litre less than in the spring. Almost 500 First Milk members on liquid contracts will be paid 21.7p/litre.

NFU dairy board chairman Rob Harrison described the latest price cuts as “another kick in the teeth” for the average dairy farmer who was now making a “significant loss for every litre of milk they produce”.

He said: “There are many farmers who have invested heavily in past years and are now suffering.”

Farmers For Action (FFA) chairman David Handley said he was “disgusted” by the price cuts. He said peaceful protests against milk processing plants and supermarkets depots would continue until farmers were paid a fairer price for their milk.

Following last week’s FFA’s protest at the Iceland distribution site in Swindon, Wiltshire, Mr Handley said Iceland bosses handed him a letter which he described as a “major breakthrough”. In the signed letter, Iceland senior management state they would agree to an investigation by the supermarket ombudsman into how the dairy market works within the retailer.

Dairy farmers have accused Iceland of devaluing milk after it lowered the price of a four-pint carton to 89p. But the retailer said this decision hasn’t affected the price it pays farmers who supply its milk. A spokesman for Iceland Foods said the business would co-operate fully with the adjucator if an examination was launched.

“Iceland joint managing director Nigel Broadhurst had an amicable meeting with David Handley in which Iceland again emphasised that it had nothing to hide from dairy farmers,” the spokesman said.

Milk supplies remain high, with UK daily production running 4.7% up on the year and the EU turning out 4.6% more milk in September than it did in 2013.

Independent dairy analyst Ian Potter said: “If anyone is thinking these are the final cuts they are very optimistic and are not reading the tea leaves.

“The pinch point will come in the spring and unless things change we are going to be in a very serious situation. The big question is: how low will it [prices] go?

“It is self-inflicted. We are producing too much milk, but we’re not on our own – it’s a worldwide phenomenon.

“It’s all about supply and demand, but there just isn’t the demand there for the amount of milk we are producing. Once we get through the back-end of July, we might see it level out a bit.

“Medium- to long-term, I’m very optimistic about the dairy industry. It will come back into balance. But it’s buckle up for now, lads.”