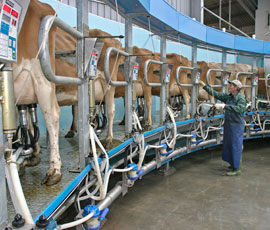 Some of Britain’s leading milk processors have this week sought to stem fears that a cut in farmgate milk prices could be coming in the New Year and other buyers have been urged to give similar reassurance.

Milk Link wrote to members on Tuesday (13 December) to say the current milk price (28.5p for a standard litre) would be at least maintained until next April.

Chief executive Neil Kennedy said negative market talk was not justified and that farmers needed price stability. A December meeting of the Milk Link board had reviewed performance of the business and prospects for the dairy market and concluded the floor in farmgate price could be set until at least April 2012.

“We hope that by maintaining your milk price for the next three months will provide you and your businesses with much needed stability at a time when we fully appreciate that dairy farmers remain under considerable financial pressure,” the letter said.

That followed other good news for farmers supplying First Milk and Meadow Foods.

Meanwhile Meadow Foods announced a price rise of 0.5p/litre from 1 January, paid to all farms supplying the processor, taking the standard litre to 28.88p.

Head of milk procurement Jim Bebb said the increase was designed to encourage suppliers to produce more milk. “There has been some negative talk in the market; we’re trying to give a bit of pace to the market which over the last month or so has started to subside.”

Meadow Foods buys about 420m litres of milk a year from 520 producers and is looking for new suppliers in all of its milk fields which are spread across Cumbria, Staffordshire, Shropshire, Derbyshire, Cheshire and south Wales.

NFU Scotland milk policy manager George Jamieson said the moves were a timely commitment to members of those processors and should serve as a “warning shot” to any milk buyer contemplating lowering prices.

“It is a huge disappointment that some liquid milk processors are looking to use a slight weakening in global and UK commodity values as justification for talking down the milk price when we should be building on the huge positives that exist in the market for milk and dairy products.

“Some commodity prices have weakened, but from a very high level. Already there are signs that the global situation has stabilised, with both November auctions, carried out by the New Zealand dairy giant Fonterra showing improvements. In the UK, powder and cheddar prices are stable, and although butter and cream prices have fallen, they remain at levels substantially above those seen 18 months ago.”

The union’s own pricing formula, based on commodity values, prices milk at 32.64p/litre. Allowing 1.5p/litre for transport costs, it estimates producers should be getting more than 31p, some 3p above the average farmgate price.

“Plenty of scope exists for further price rises and while we can sympathise with liquid processors over the damaging pressure that retailers are placing on them, we are adamant producers must not be used as the safety valve once again,” Mr Jamieson said.

Competition for the declining volume of UK milk should also be a driver of prices in areas where milk producers had a choice of milk buyer, he added.

• Milk Link also said it was also building up for a 2011-12 processing interest payment to members at a rate ahead of last season’s 9.25% return on members’ qualifying loan balances. This will be confirmed and paid out at the end of May 2012.

Some £4m was distributed to members in 2010-11, worth on average around 0.41p/litre across the total volume of milk supplied in the year. A long-standing Milk Link member producing 1m litres a year received a payment of around £4,100.