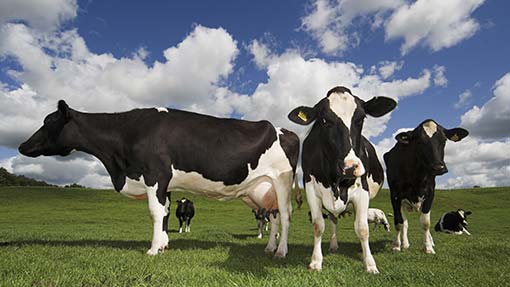 British dairy farmers produced more milk this year than in the last nine and strong spring production could put downward pressure on the market.

Milk production in March was 1.246bn litres, 12% better than in 2013 and the highest for the month since the Rural Payments Agency started collecting the figures 20 years ago.

The provisional total for the milk year is 13.670bn litres, the best performance since 2004-05 but still comfortably short of the UK’s 15.3bn litre quota.

Butterfat dipped to 4.06% in March, taking the yearly average to 4.02%, which means the volume totals will be adjusted upwards slightly.

John Allen of Kite Consulting said the impressive spring production looked set to continue and could have an impact on the milk market.

The price of spot milk has fallen to about 26p/litre on the back of the much-improved production, with the average farmgate price at 33.85p/litre in February.

“We have had an early, mild spring and spring-calving herds will be producing very well,” Mr Allen said. “Yields are running 14-15% above last year and that is creating problems in the markets.

“The lower spot price at the moment will drive the trade to put downward pressure on the UK milk price.

“Producers are shooting themselves in the foot with the amount of milk they are producing this spring.”

Andersons dairy business consultant Gaynor Wellwood said there had been a big turnaround in production after a slow start to the milk year.

“Early [last] year, with the late spring, the cows did not come out and did not milk as well as they should have done,” she said.

“But there was good quality silage made in the summer and there was huge turnaround in the autumn. When milk prices took off everybody took off in terms of production.

“If it continues with the good spring it could be a bumper year. People are very excited about milk production again. Existing people are expanding and there are new people coming in.”